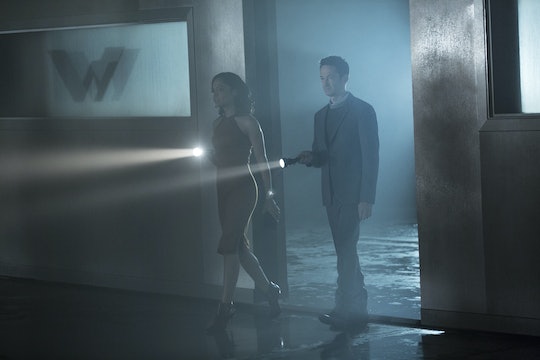 What Does Abernathy's Return To 'Westworld' Mean? It Could Spell Trouble For Ford

There are only two episodes left in the first season of Westworld and it looks like the show is coming full circle. Towards the end of the eighth episode, fans saw the return of Peter Abernathy, Dolores' father, and fans are now wondering what Abernathy's return could mean for Westworld. And rightfully so, considering Dolores' dad was the first host to start acting strange at the beginning of the season.

After Bernard killed Theresa, Ford got to work using Theresa's death as a way to turn the tables on Charlotte. Ford claimed Theresa fell off a cliff while trying to smuggle important date out the park. He also claimed that the firing of Bernard and Clementine's malfunction was all a set up by Theresa, so Bernard was given his job back. Clearly Charlotte suspects that Ford is up to something, but she went along with his story because it allowed Theresa to be the scapegoat for what was really Charlotte's plan all along — and she has a new idea in mind.

Enlisting the help of writer Lee Sizemore, Charlotte went down to Level 83 to bring an old host back online to continue smuggling data out of the park. Even though it seems Charlotte picked him at random, she ended up choosing Abernathy, who was the first of the droids to start experiencing glitches. Charlotte tasked Lee with creating a new narrative for Abernathy and instructed him to send him back into the park. If Lee knew about Abernathy's sketchy past, he said nothing about it.

Back in the premiere episode, Abernathy began to malfunction when he saw a picture of a modern-day city. Hosts are not supposed to be able to see modern things that would disrupt their reality, but for some reason Abernathy could. This caused him to malfunction and when he was brought in for questioning he practically attacked Ford, mixing up lines of Shakespeare to basically say he'd get his revenge. That was when he was sent to Level 83 to be shut down, but not before Bernard could whisper something in his ear that viewers couldn't hear. Now that it's known Bernard is a host, these whispered words become even more interesting and with Abernathy being put back into play, it may come back up later.

Though Charlotte seems to think she's outsmarting Ford by using an old host to do her bidding, she has no idea what Abernathy is capable of (or does she?) and if Maeve is any indication, Charlotte may have just let loose a killer host within the park. I can't wait to see how this all unfolds.