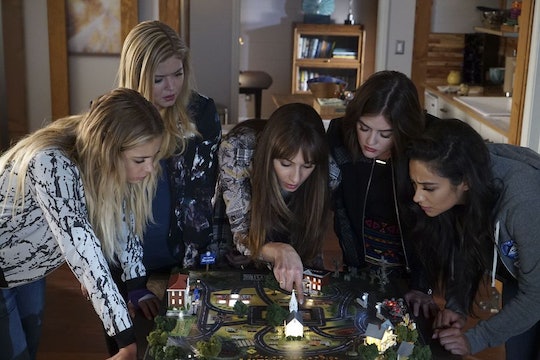 The Puzzle Pieces Are Falling Into Place On 'Pretty Little Liars'

Upon first receiving Liar's Lament, the A.D.-created board game that promised to unravel Pretty Little Liar's Season 7 mystery with maximum manipulation, all five girls were reluctant to play. However, they kept getting pulled into A.D.'s game despite themselves and, as they played along, pieces of the puzzle literally started to come together. For every task from the game one of the Liars completed, they got a puzzle piece as a clue. But what does A.D.'s puzzle mean on Pretty Little Liars?

Unsurprisingly, Spencer was the first to start connecting the dots. Though they had only earned two puzzle pieces (one from Spencer's A.D.-mandated visit to Toby in the hospital, and another from Emily blackmailing a teenager), Spencer easily spotted the picture starting to form on the board. It was a map of Rosewood, which confused all of the girls. Alison pointed out that A.D. would hardly give them a route out of town after working so hard to keep them trapped there.

But there was another possibility: A.D. was giving them a bizzaro version of a treasure map, laying out the path for the girls to discover something big. Considering how many mysteries (and bodies) are buried around Rosewood, A.D. could be leading them to anything.

As far as viewers know, A.D.'s main mission is to unearth the identity of Charlotte's killer. It's possible that they already know who did it (there seems to be no end to A.D.'s power) but they want the Liars to discover it in the most convoluted way possible, which is generally A.D.'s M.O. If that's the case, then A.D. could be leading the Liars to the location of Charlotte's killer.

Or A.D. could be leading the Liars directly to them. There are eight episodes left of Pretty Little Liars and presumably eight puzzle pieces remain before the map is completed. This could be A.D.'s way of building anticipation for the final showdown between them and the girls, when everything left uncertain will finally be revealed for good.

Then again, it could be something totally different. It's still early in the game, which means there are many secrets to uncover before things become clear. The show is known for dropping major revelations out of left field (like Mary Drake being Spencer's mother, when viewers didn't even know Mary Drake existed until Season 6), so A.D. could be holding back on the big stuff until the Liars get farther in the game.

The map could be leading to something that no one saw coming. And I can't wait to see how it all plays out.