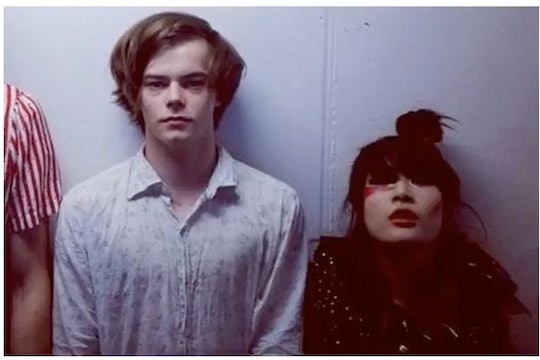 What Does Akiko Matsuura Do? The Mother Of Charlie Heaton's Son Is Talented, Too

Last week, fans of the Netflix show Stranger Things received some pretty shocking news. As it turns out, the actor behind one of the show's main characters reportedly has a son, according to Us Weekly. It was revealed that 23-year-old British actor Charlie Heaton — who plays Jonathon Byers, the older brother of an abducted schoolboy, Will, in the hit supernatural series — allegedly has a 3-year-old son with his ex-girlfriend, Akiko Matsuura. Fans of the show and the actor are naturally curious about the mother of Heaton's child. But what does Akiko Matsuura do for a living?

The Mirror reports that Matsuura and Heaton were both members of the rock band Comanechi — with Heaton playing drums and Matsuura on lead vocals. In 2014, the couple welcomed a baby boy, whom they reportedly named Archie. “Charlie became a dad when he was just 20," a source told the publication. "He met Akiko when he was just a teen and fell head over heels in love." The source continued, "They’re no longer together but they have an amicable relationship for the boy’s sake."

Although Heaton ultimately left his career as a rockstar for acting in 2015 (I have no doubt that Stranger Things fans thank him for this decision, by the way) Matsuura is still very much part of the music scene in the United Kingdom. She was a member of noise rock band PRE and she also plays drums for The Big Pink, according to The Mirror. In 2013, Matsuura told The Quietus:

... Writing the perfect single is my all-time ambition. It’s the ultimate expression of pop sensibility.

Check out Matuura in action on the drums for The Big Pink's "Dominos." This mama can rock!

And if you're curious to see what he looked like, you can catch a teenaged Heaton on drums (with Matsuura front and center on vocals) in Comanechi's 2013 music video for "Love Is the Cure." Fair warning, it's more than a bit trippy.

According to Teen Vogue, little Archie lives with his mother, who is also 23, in London. Since Heaton has undoubtedly been busy filming Stranger Things in Los Angeles, it's probably safe to say the actor hasn't had the opportunity lately to spend much time with his 3-year-old son. A source confirmed this to The Sun, telling the publication, “Right now Charlie’s career is his priority but he hopes to see more of his son once filming commitments calm down.”

And Heaton may have the opportunity sooner rather than later to spend some quality time with his son in London, although not under the most ideal of circumstances. That's because the actor was reportedly sent back to London after he was allegedly found with "traces" of cocaine at LAX airport on Oct. 28, according to The Sun. According to the publication, border officials found white powder on his personal belongings. “He was not arrested," a source told The Sun. "He was held at the airport for a while and then put back on a plane to London that night. If you are a foreign national and it is a large amount of drugs you may be charged."

It's not clear at the moment whether Heaton will be allowed back in the United States, or when for that matter. But, in the meantime, hopefully Heaton can enjoy some extra snuggles with his little guy while everything is sorted out — while also giving Archie's mama a break.