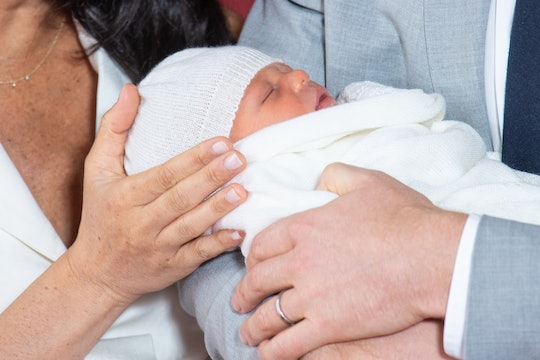 The Meanings Behind The Name "Archie" Are Perfectly Royal

Archie Harrison Mountbatten-Windsor. That is the name Meghan Markle and Prince Harry have chosen for their first born son, which they proudly announced on May 8 via Instagram. Now that we know his name many might be wondering, what does Archie mean? Though there are several meanings that you can find on the internet, they are all filled with empowerment. I suppose that's not much a surprise for the latest royal baby.

Archie is defined as "truly brave," according to Name Berry. The site also claims the name is of German origin, tracing it back to an ancient tribe called the Teutons. Another definition for Archie is "very bold," as noted by Baby Center. The site claims that the name was most popular within the United States in the late 1800s, but saw a decline throughout the 1900s. According to a chart based off of information from the Social Security Administration, the site suggests that Archie saw a resurgence of popularly in the early 2000s.

A third definition of the name Archie suggests it is diminutive of Archibald, as noted by Oh Baby Names. The site claims that Archibald is a more modern version of an Old High German name Ercanbald. Separately, "ercan" and "bald" mean "genuine" and "bold," respectively, according to the site.

One look at that list of characteristics and the name "Archie" for Prince Harry's first born son makes complete and total sense, doesn't it? Though Archie is currently seventh in the line of succession for the throne, as reported by TIME, his royal duties will still be of the utmost importance as he grows up to serve the crown.

Like his father, Prince Harry, we will likely watch Archie grow into a respectable public figure. Many are likely already wondering if Archie will follow in his father's footsteps and join the British military. Or will we see him take on more of a humanitarian role, like his late grandmother, Princess Diana? Both Prince Harry and his brother, Prince William, have always been champions for the people — especially children.

Through his work with younger people, many of whom fall out of mainstream education, The Duke believes in the importance of mentoring schemes. He has visited many projects around the world that highlight the positive impact of children's mentoring opportunities. In the UK, he is closely involved with a programme based in Nottingham that works with young people to deter them from becoming involved in youth violence and gang-related activities. Supported by his Foundation, the programme trains a group of young people as youth leaders, providing them with formal qualifications and apprenticeships in mentoring and leadership, while at the same time supporting primary school children, who are at most risk of becoming involved in youth violence, by working with their schools and families.

Whatever Archie grows up to be, it's safe to assume that Meghan Markle and Prince Harry will be extremely proud of him.