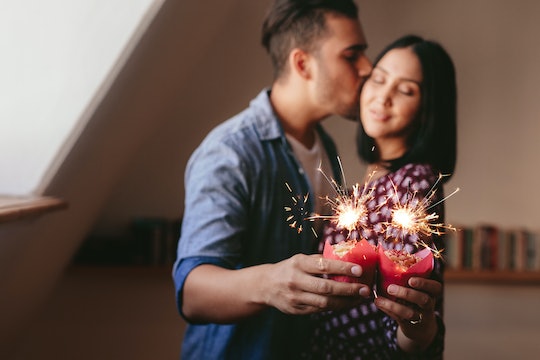 If you're trying to have a baby, it's good to get a little distracted by fun, inane superstitions every once in awhile, because, heck, TTC is stressful AF and laughing about it can only help. Plus, most people are at least a little superstitious if you stop to think about it. Good luck, bad luck, and no luck at all is definitely something I know I think about. If you're TTC, it might be fun for you to ask, what does astrology say about getting pregnant on New Year's Eve? Because honestly, it's good to know all the angles.

According to traditional astrology, babies conceived on the night of New Year's Eve will likely be born to Libra or Virgo, which, strangely, are two very different star signs. Funny irony if you're considering knocking boots to make a baby while wearing your 2018 googles, Virgo is the maiden or virgin sign. It represents a pure spirit who is fertile and wise. Well, you've got the fertile and wise part down, am I right? Libras are an interesting dichotomy of fair-minded and yet, according to astrologers, they can hold a grudge. I would definitely refrain from retelling their conception story to them every New Year's Eve. Keep that bit of hilarity for your Virgo, and watch their cheeks blush.

Fun fact, my brother is a Libra, and he's excellent at mediating situations. He does this by completely lambasting the argument and generally making fun of everyone involved, but because his impersonations are so dead-on, he jostles the situation and it passes. It's a strategy, one I might not work with, but it does work. Also, he was born late. This is of course making me think about the fact that my parents might have done it on New Year's Eve after my dad (a musician) came home from a show. Ew. It's one thing to know your mother is a groupie, it's another thing to think about it 30-something years later. I mean, I can't un-think that. It's there now — forever.

According to Chinese astrology, babies born in September of 2018 are born in the year of the Earth Dog, and if your little bun is born on Sept. 8, it might be because that is an auspicious time to go see a doctor or go to the hospital. If you're having a home birth, it's probably just because you made plans and Murphy's Law has given you its verdict.

Lots of babies are conceived on New Year's Eve, according to census data, and guessing, but it still falls just behind Christmas Eve for total number of conceptions. I have a hypothesis as to why this is. I think it's because so many people, even those who are actively TTC, are out at parties and don't get home until very late at night, and often, very inebriated. You probably get home and pass right out (after drinking a few glasses of water and taking a Tylenol).

According to the ancient Roman mythology, New Year's Eve and New Year's Day are a celebration of the god, Janus, noted History.com The god of change and new beginnings means that to become pregnant during this festival would fall right in line with their merry making parties and altar worship, and very lucky. Which is way better than the tradition of the ancient Babylonians who were also key components in the basis of modern Western astrology and thought to make ritual sacrifices to Zeus and Athena on that day. Sex is way better than being thrown over a cliff.

If you're lucky enough to make a baby after relaxing with friends, know that your child will be born in the most popular birth month, so plan on spending oodles of dough on parties every September, not only for your kids, but also their friends, and your friends' kids. As for their lot in life astrologically speaking? A wise virgo with calm energy or a peacemaking libra with a tendency to hold a grudge might be headed your way in 40 weeks time.

More Like This
How Much Hair Loss Is Normal? 9 Signs You’re Losing Too Much Hair
How To Tell If Someone Is Lying To You: 34 Signs To Watch For
These Oktoberfest Instagram Captions Will Get Likes & Prosts
39 Halloween Trivia Questions & Answers