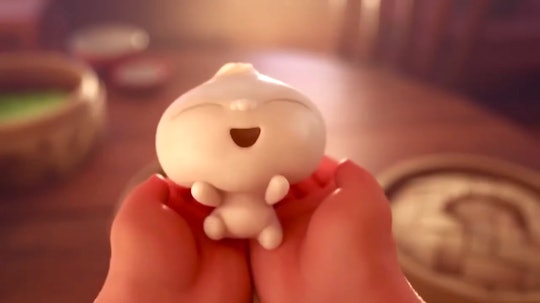 There Is Some Very Deep Meaning Behind Pixar's Lovable 'Bao'

Ever since Incredibles 2 hit theaters earlier this month, Pixar fans have been buzzing about the action-packed sequel. However, many people are talking about another aspect of their moviegoing experience as well. Between the previews and the feature presentation, a silent, animated short film called Bao plays. The film tells the sweet story of a woman raising an anthropomorphic dumpling, leaving viewers wondering what the word bao means.

The main meaning of the word bao will make a lot of sense if you've seen the film. As it turns out, bao is a word for a Chinese dumpling, which is a small roll of dough filled with meat or vegetables, according to the Oxford English Dictionary. Bao, which runs about eight minutes long, centers on a Chinese mother. In the silent short film's opening scene, she makes dumplings from scratch, which she then cooks and serves her husband and herself. After her husband finishes his dumplings and leaves the table, and she puts her final dumpling in her mouth, it begins to come alive, growing a humanlike body and face.

The mother proceeds to raise the dumpling as if he were her son. Over the years, as he grows older (and goes through the typical teenage dirtbag phase), he distances himself from his overprotective mother.

Eventually, the dumpling invites his fiancée over to meet his mother, and he packs up his bags to leave. The mother is so devastated that, in order to prevent the dumpling she raised from leaving her, she (spoiler alert) eats him alive. She quickly regrets her decision, and she is seen crying in her bed. However, the dumpling's shadow suddenly appears on the wall, and the following shot reveals that the dumpling is not actually a dumpling, but simply a human son (with a dumpling-shaped head, naturally). He gives his mother a pastry that they used to eat together when he was a child, and he comforts her. Then, the mother, her husband, their son, and his fiancée are all seen making dumplings in the kitchen together.

Basically, the dumpling was a metaphor for a mom who loves her child a little too deeply. Domee Shi, who both wrote and directed Bao, explained why she chose a Chinese dumpling, aka a bao, to represent the son in the film. "My mom would often hold me close and say, 'Aw, I wish I could put you back in my stomach so I knew exactly where you were at all times,'" Shi told Thrillist in an interview. "Like, 'Aw, that's creepy but sweet,' I guess."

Because a dumpling was one of the main characters in Bao, Shi made sure the production crew was well-educated on the bao-making process. She took the team to various restaurants in San Francisco's Chinatown, and she even had her own mother come in to teach dumpling-making classes. She told the Los Angeles Times in an interview:

We also brought my mom in twice to do dumpling-making classes for the whole crew. That was really fun research because we actually filmed her hands kneading the dough and making the wrappers, and that was used as reference for the opening shots of the short.

Bao deals with so many topics — Chinese culture, children leaving the nest, and the importance of cultural food, to name a few — and it's clear that the title Bao was the perfect choice to encapsulate the film's spirit.