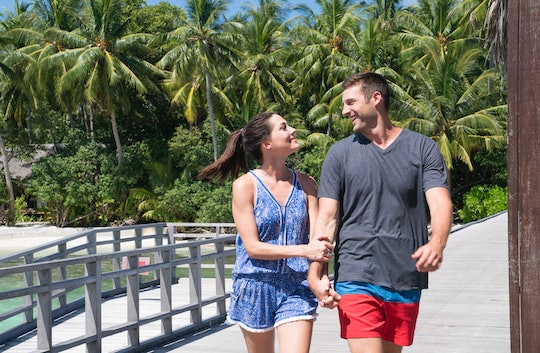 Fans Want To Know How Becca's Mom Feels About Garrett

I don’t know about you, but I certainly care what my family and friends think of any new partner I introduce to them. And from the looks of things, Becca is going to rely on her mom's advice when choosing between Blake and Garrett in the Bachelorette finale. So what does Becca’s Mom think of Garrett? He may soon be her new son-in-law.

Becca’s mother, Jill Kufrin, hasn’t publicly commented about any of the men this season. For the record, though, she didn’t publicly comment about Arie either. But seeing how that ended up, I think it's pretty safe to assume she’s not his biggest fan.

Like many parents that appear on The Bachelor franchises, Jill seemed skeptical when she appeared on Arie and Becca’s hometown date. I think this is pretty understandable, even if Arie didn’t end up changing his mind after he picked Becca. During Becca's hometown date on The Bachelor, Jill said, "We trust our daughter, so if you two end up together at the end of this I guess it’s fine." Furthermore, when Becca asked her mom if she saw their relationship ending a proposal she merely said, "No." So not only is Jill Kufrin no-nonsense, but perhaps she's clairvoyant too.

Becca, her mom, and the rest of the family haven't had the easiest go of it. Becca’s Dad, Steve Kufrin, passed away in 2009 after a battle with brain cancer. Becca’s Uncle Gary has assumed a father-figure role, but it’s clear no one could really replace her dad.

Fans will get a chance to see Jill (and hopefully the other Kufrins) again in The Bachelorette finale. In the finale promo fans get a glimpse of Becca's heart-to-heart with her mom which she explains why choosing between Blake and Garrett is so difficult for her. "I could see a future with both of them," Becca tells her. "It's down to the question of who can't I picture my life without."

Jill then asks whether she's worried she'll hurt one of them. Becca says, "I don't want to hurt anyone ever." And to this Jilly has a no-nonsense response that we should be expecting from her at this point: "Well, it's going to happen." How real is that? Fans can tell that Jill wants the world for Becca, but doesn't want her to have any illusions about what she's doing. During the actual finale, Bachelor Nation may find out who Jill — and the rest of Becca's family — prefers and if that impacts her decision at all.

Personally, I haven't been a fan of Garrett's since it was discovered that he "liked" offensive posts on Instagram, one of which insinuated that a Parkland shooting survivor was a crisis actor. When it came out Becca defended Garrett, but her family hasn't said a word. She said in an interview with ET, "I can't fault on anyone for what they believe and who's to say that anyone is truly what they believe in if they just double tap." Garrett also issued an apology, saying, "I am sorry to those who I offended, and I also take full responsibility for my 'likes' on Instagram that were hurtful and offensive."

There's no evidence that Becca's family was at all aware of Garrett's Instagram habits before meeting him on the show, so they will have formed their opinion of him from just a short meeting. Maybe he charms them, or maybe he doesn't. All I can say is that I believe whoever Becca chooses, her mom will support her. I mean, he cannot possibly worse than Arie, right?