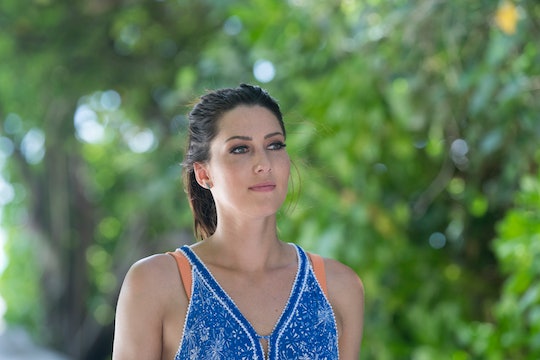 Becca's Mom Keeps It Real On 'The Bachelorette'

The Bachelorette is, objectively, an odd way to find love. Daring to find a husband on reality television — for the second time — is a bold move for Bachelorette Becca Kufrin to take, and sometimes I wonder how her family feels about it. What does Becca's mom think of The Bachelorette? Fans got to see a few glimpses of the lead's mama already.

Becca's mother, Jill Kufrin, has not said anything publicly about the show. But as Bachelor Nation knows, this is not Becca's first rodeo. Becca was on Arie's season of The Bachelor and went through hometown dates in which she brought him home to meet her family in Minnesota. Jill was featured on The Bachelor hometown dates, and seemed, understandably, reluctant of the process. She said, "We trust our daughter, so if you two end up together at the end of this I guess it’s fine." If only Jill had known then what Becca would go through at the end of the show.

As far as fans know, Jill hasn't said anything about how Arie broke Becca's heart. But if I know moms — and I think I do — she likely had some choice words for the guy after he publicly dumped her and got engaged to Lauren instead. Fans just don't know what they are.

What we do know, however, is that Becca and her mom have a close relationship. Her father, Steve Kufrin passed away after a five-year battle with brain cancer in 2009, and then in 2015 her mother battled breast cancer. Becca shared details about it in a Woman Crush Wednesday Instagram post about her mom back in October of 2015: "This beautiful soul never ceases to amaze me," Becca wrote. "She has endured two major surgeries in the past couple weeks, countless appointments with surgeons and oncologists, and continually deals with uncertainties that come holding cancer's hand. And yet she has shown more strength, grace and positivity than most people will ever have in an entire lifetime."

Thankfully, it appears that her mother is now healthy and here to help her on her Bachelor and Bachelorette journeys. Viewers will see her on the finale, as Blake and Garrett will meet Becca's family. In the promo for the finale, Becca's seen opening up to Jill about how tough a decision this is. "I could see a future with both of them," Becca says, "It's down to the question of who can't I picture my life without."

Jill asks, as she takes Becca in for a hug, "Are you said or worried about hurting one of them?" When Becca says she doesn't want to hurt anyone, Jill says one of the most mom truths ever: "Well, it's going to happen." I think we all know the feeling of moms telling us what we need to be told, and this seems like one of those moments.

I'm very curious to see how both Blake and Garrett get along with Jill and everyone else in Becca's family, and how that will impact her decision. Thankfully, neither of these guys are like Arie so I don't think they'll be experiencing deja vu when meeting them. Becca did tell HollywoodLife that choosing between Blake and Garrett was "the hardest day," but hopefully having her family's opinions made it a little easier. I know at the end of the day, her mom will have her back no matter who she picks.