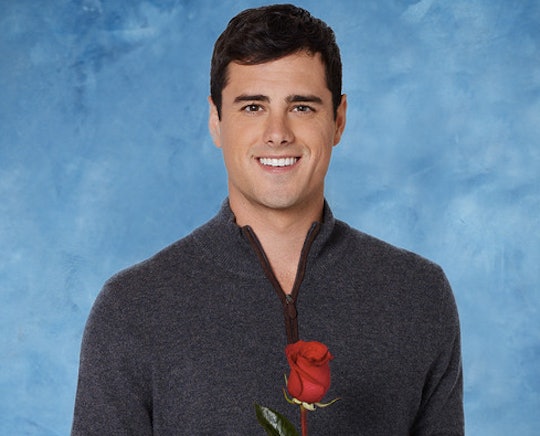 What Does Ben Higgins Do? The 'Bachelor' Has A Pretty Sweet Gig

We know all about what the women on The Bachelor do for a living, (how can you forget Tiara, the Chicken Enthusiast?) but what's the occupation of the show's star? Besides being a "Perfect Ben," and charming women nationwide with his wit, looks, and gentlemanly persona, what does Ben Higgins do for a living? Higgin's a business analyst. Not a bad day job, considering his latest gig is being a full-time heartthrob. But seriously, Ben's job for a Denver company called Talisys, which Bustle reported is where Higgins specializes in financial services software kinda reminds me of Chandler Bing's job. I'm not quite sure how Higgins (or Chandler, for that matter) spent his office time analyzing business things, but, Ben is gainfully employed and brings home the bacon, which is more than I can say for some of the cads I've dated.

On his The Bachelor bio, Higgins writes that he's "worked at a zoo in Peru, traveled through the jungles of Bolivia, and even hiked the spiritual trails of famed Machu Picchu." Jeez. And here I thought he was crunching numbers all day, or whatever business analysts do.

Scrolling through Higgins' LinkedIn page, where you'll note that the 27-year-old former Bachelorette contestant (nope, that's not on his LinkedIn) lists that he worked at a local fish fry as an event manager, is definitely some quality time spent on the Internet. (As an aside, I'd like to report that I'm 49 connections away from being linked to Ben Higgins.)

Higgins told E! last July when it was announced he'd follow Chris Soules as the next bach:

I have a good life, though. I have a job that is steady, I have a house in Denver and I have a great family.

Insinuating that the only thing missing from his life was love. He's pretty confident he'll find it on this season's Bachelor, and more power to him.

But can he be as circumspect in the bedroom as he is in the boardroom? Don't worry this isn't a spoiler alert, just a tweet of Ben with a puppy. As if you weren't swooning over this guy already:

Oh, Ben, the season has just begun, but when you choose, be sure to put that business analyst acumen to use in all matters of the heart. I'm positive no one has made that joke to you at all this season.