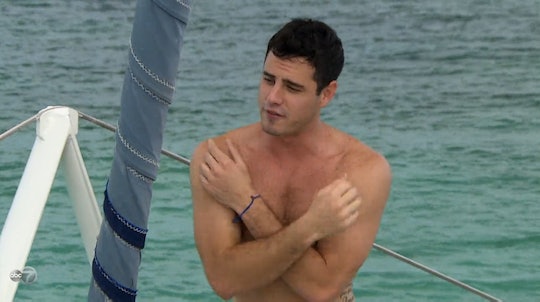 What Does Ben's Tattoo Mean? The 'Bachelor's Ink Is Nobody's Business But His Own

I’ve got to be honest with y’all: I don’t really care about Bachelor Ben Higgins' tattoo. (Nothing personal Ben — or fans of Ben — but it’s the truth.) It's not that I don't like tattoos. In fact, I do. Very much so. My problem is that it's his tattoo — something personal, on his body, and none of my damn business. You see, for many, tattoos are intimate. For many, tattoos are meaningful. And for many, tattoos are special, specific to the recipient's life and story. But that hasn’t stopped many from trying to figure out Ben’s tattoo is. That hasn’t stopped many fans, and the media, from asking what the hell does Bachelor Ben’s tattoo mean?

As someone who is heavily modified, and heavily tattooed, myself, I’m going to say this now: I’m not guessing the meaning behind his tattoo. I’m not assuming I know what he thought when he got it — or why he got it — and I am not making inferences as to his personality from his ink. What I will share with you is what I saw, what I read, what exactly the picture revealed.

The ink in question appears on Ben’s ribs and reads, in script, “Commit to the Lord whatever you do and your plans will succeed — Proverbs 16:3.” (I know the picture isn’t totally clear but Bachelor Ben cleared this up himself in an interview with Us Weekly.)

Ironically, according to a podcast with Channel 33, The Bachelor’s tattoo originally contained a mistake: It read Proverbs 16:34 instead of Proverbs 16:3. (Whoops!) Fortunately for Ben, it was an easy mistake to fix — he had the 4 covered with a cross. (Thank goodness!)

Aside from seeing Ben's tattoo this week, fans also saw Caila's confusing love confession, a group of "aggressive pigs," and the departure of Jennifer, Leah, Olivia, and Lauren H. Or so Emma Gray, Claire Fallon, and Katelyn Bogucki of the Huffington Post podcast "Here To Make Friends: A Bachelor Recap Show" tell me. And with just six girls — and one tattoo — remaining, anything could happen. Like anything! (Though I'd love to see some "mild manatees" make an appearance.)

Regardless of what the tattoo means or doesn't mean to Ben, it's a very personal decision to get inked up in the first place, which probably means that the verse itself holds a special meaning for the bachelor as well. Whatever the case, you should probably leave any sleuthing on the backburner. It's his tattoo and he'll explain it when he feels like it.