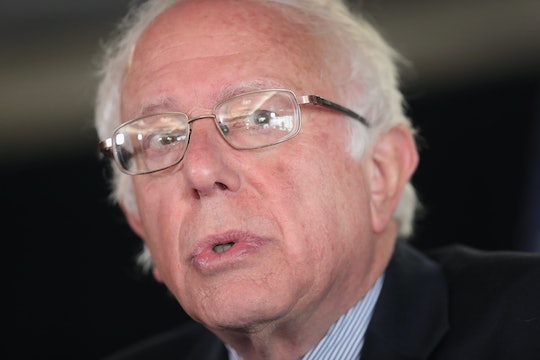 What Does Bernie Sanders Think Of Hillary Clinton's Nomination? He's Not Backing Out Yet

Pundits and media all over had assumed that Super Tuesday (well, at least, the latest Super Tuesday) would bring news that Hillary Clinton had clinched the Democratic nomination for president. But, instead, the news may have come one day early, with the Associated Press reporting that Clinton had indeed secured enough votes to be the first woman nominated for president by a major party. Of course, this is huge news for Clinton — and her opponent, Vermont Sen. Bernie Sanders, who is still hoping to turn superdelegates in his favor prior to the Democratic convention this July. But what does Sanders think of Clinton's reported nomination? And will Sanders back out?

Hardly. His campaign swiftly responded to the report Monday, emailing press with their statement. And speaking to the press directly. As Sanders' campaign said, "It is unfortunate that the media, in a rush to judgement, are ignoring the votes of superdelegates before they actually vote at the convention this summer."

Secretary Clinton does not and will not have the requisite number of pledged delegates to secure the nomination. She will be dependent on superdelegates who do not vote until July 25 and who can change their minds between now and then. They include more than 400 superdelegates who endorsed Secretary Clinton 10 months before the first caucuses and primaries and long before any candidate was in the race.

Our job from now until the convention is to convince those superdelegates that Bernie is by far the strongest candidate against Donald Trump.

Quite a different response than what some expected from the Senator.

But is Sanders right? Does he actually have a chance to take the nomination from the presumptive nominee, at least, as the Associated Press is calling it on Monday? Some outlets, like The Washington Post, crunched the numbers, and still gave the win (and the superdelegate votes) to Clinton. But that's not stopping Sanders. The nominee has expressed his desire to contest the convention in Philadelphia, presumably no matter what happens in California during the upcoming Super Tuesday. And he's right to say that the nominee isn't secured until they are declared the nominee at the convention — and as this election has proved, anything can happen.

Still, with this recent report, Sanders could feel mounting pressure to back out of the race. Especially after reports indicated on Monday that President Barack Obama would endorse Clinton, all but requesting her opponent gracefully back out and back the party in its fight against Trump.

And how will Clinton feel if Sanders doesn't back out? Well, it doesn't seem to shake her much.

Clinton has waited eight years to clinch the nomination. Here's guessing she can wait another month to do so unopposed.