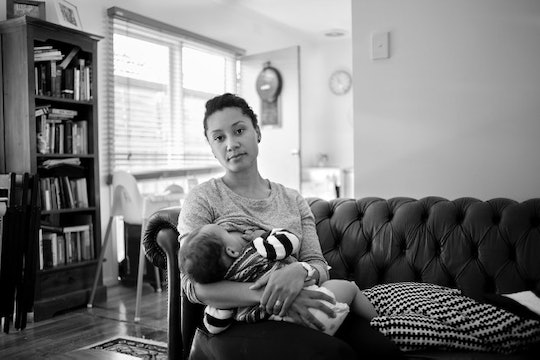 "What Does Breastfeeding Look Like?" This Important Photo Series Lends An Honest Look In Moms' Real Lives — PHOTOS

There's no doubt that the effort to #NormalizeBreastfeeding has grown exponentially in recent years. Celebrity breastfeeding photos are increasingly common, a model breastfeeding her son recently graced the cover of Elle Magazine, and romantic pictures of women breastfeeding while looking like goddesses in some kind of an enchanted forest are rapidly becoming a thing. And while the idea of these photos and their purpose is applause-worthy, they also run the risk of setting an unrealistic standard regarding breastfeeding and what it really, actually looks like. Breastfeeding, in real life, rarely looking like a celeb's Instagram, or any kind of goddess in any kind of forect.

That standard is what photographer Suzie Blake of Melbourne, Australia wants to break. Suzie is not only an artist and a photographer, she's a mom to two sons and the woman behind a new photography project called "What Does Breastfeeding Look Like." After seeing overly idealized and unrealistic photos of breastfeeding, Suzie realized a need to capture the reality of breastfeeding, that it can be difficult, stressful, frustrating, or even merely boring, but not at all glamorous.

Suzie has created an Indiegogo page to raise money to travel from Australia to the UK, where they have the lowest breastfeeding rate in the world. Her mission is to empower women by showing real images of an incredible and not-easy thing: sustaining another life with your own body. And because many women have never seen another woman breastfeeding before they attempt to breastfeed their child, according to Suzie, there's no wonder that women have unrealistic expectations, become overwhelmed, and simply give up breastfeeding altogether.

You can easily see the contrast between Suzie's photos and the photos of models breastfeeding their babies while five people do their hair and makeup (which isn't to say there's anything wrong with that, if it's your reality, Gisele). Reality might not be as pretty, but with it's truthfulness — and the confidence that truth might instill in a breastfeeding mother who might otherwise give up — it is definitely more powerful.