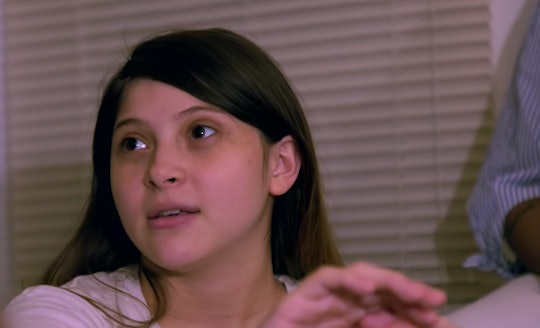 Here's How Brianna Jaramillo From 'Teen Mom' May Make A Living

Brianna Jaramillo was recently featured on MTV’s newest show, a Teen Mom spinoff called Young & Pregnant. The show followed five women dealing with unexpected pregnancies at very young ages. Jaramillo became pregnant at 17, and is old enough to have a job now to help support her small family, so what does Brianna Jaramillo from Teen Mom do? Not much is known about her life outside of what she offered to share with the public on Young & Pregnant, but her social media offers some clues about what Jaramillo might be doing now.

Jaramillo had an on-again-off-again three-year relationship with her transgender boyfriend, Danae, who was also on the show, according to People. But he is not her son's biological father; the two were reportedly not together when Jaramillo hooked up with an old friend and became pregnant.

And although Danae said he would help raise Jaramillo’s son as his own during the show’s premiere, according to People, it appears that they might not be together now. So Jaramillo almost definitely doesn't have any sort of monetary support from him, and may need to earn a living all on her own.

As many single moms figure out, you've got to hustle when you have another life depending on you. And it seems like Jaramillo is doing just that, but maybe not in the most conventional way, like with a 9 to 5 job as some might expect.

Jaramillo's Instagram is a mix of cute selfies and what appear to be product promotions. In fact, several of her most recent posts seem to be promoting products in some way, even if they are items that she may legitimately use as well.

For example, in a recent post, Jaramillo is lounging in a shirt, and she captioned the photo, "Labor Day!!!💖💖 sadly I’m sick but I’m enjoying my day in this very comfortable shirt from @mijaveeboutique ! Guys you should really check them out!😌" Because she tagged the retailer in the post, she may be getting some sort of financial compensation for wearing a shirt from the company and featuring it on her Instagram profile.

Another post from early August shows Jaramillo holding a meal replacement shake bag, and has a long caption about how good the product is and it reads very differently from Jaramillo's more personal Instagram posts. My guess is, the company paid Jaramillo to advertise the product on her social media, and offered some examples of what she could write in the personal advertisement in exchange for some sort of compensation.

It might not be conventional, but sponsored Instagram posts are a way for popular users to earn a living. The Huffington Post reported back in 2015 that when it comes to Instagram "influencers" promoting products on their profiles, "some brands pay between $5 to $10 per thousand followers, others offer $100 per 100 followers and still others pay only in free swag." Jaramillo has 187,000 followers, so this is definitely a way she could make some money and give her something to do to earn a living around her main gig as a mom.

I haven't found other evidence that Jaramillo works any sort of more traditional part-time or full-time job, though it could be that this is just not information she's shared with the general public. She clearly keeps busy taking care of her son, who recently turned a year old according to her Instagram updates, and that's a full time role all by itself. But it does appear that Jaramillo might make some money off of utilizing her impressive Instagram following as well, and if that's what she does as a "job," all power to her for making it work.