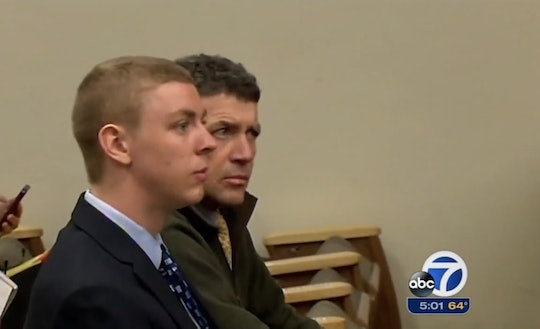 What Does Brock Turner's Dad Do? Dan Turner Has Been Vocal About His Son's Case

A woman’s powerful letter to her rapist gained worldwide attention last week for its eloquent and poignant voice about how the crime had changed her life. The unnamed victim recounted the night she was sexually assaulted by Brock Turner, a former Stanford University student, behind a dumpster on a winter night, not far from the frat party they had both attended. Turner was found guilty and sentenced to a mere six months in prison for his crime. But while his lenient sentence has been condemned and has caused intense backlash on social media, not everyone thinks the judge went easy on Turner, with his father being the most vocal. This case has dominated headlines, leaving many curious about the former swimmer’s life. But now that much of the attention has turned to his father — who wrote a letter in which he said his son shouldn’t spend time in jail for "20 minutes of action" — many are left wondering, who is Dan Turner and what does Brock Turner’s dad do?

Dan Turner, who urged the sentencing judge to reconsider his son’s jail time for probation, comes from a military background and used to work as a civilian contractor for the United States Air Force, according to military documents. Turner was charged with assisting on technology projects needed to help build weaponry.

Most recently, his letter to the judge and newly publicized information regarding his prior work experience has led to criticism of his entitlement and privilege.

Dan Turner submitted a four-page letter to Judge Aaron Persky before his son’s sentencing last week. He said that a six-month sentence — prosecutors had asked for a six-year sentence — was “a steep price to pay for 20 minutes of action out of his 20 plus years of life," even after his son was found guilty of three felony sexual assault charges by a jury. The judge also defended the sentence, saying that a longer sentence would have a "severe impact" on Brock.

The lack of responsibility — it does not acknowledge that his son committed an assault of any kind — and overall tone of Dan Turner’s letter has offended many people. People have taken the opportunity to edit his letter to acknowledge responsibility for his son's actions and mention how this case has also affected the victim.

Since Dan Turner's career and letter has been made public — which ultimately defends his son's actions, blames alcohol, and claims the victim consented — people on social media have become even more outraged with the the trial and his punishment. But, support for the victim has not wavered.

"... We both have a choice," the victim's letter reads about the outcome. "We can let this destroy us, I can remain angry and hurt and you can be in denial, or we can face it head on, I accept the pain, you accept the punishment, and we move on."

However Dan and Brock turner attempt to justify the lenient sentence is up to them – but for now, it seems the public is largely on the victim's side.