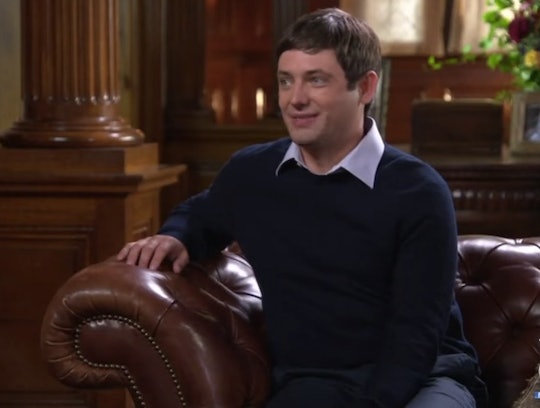 What Does Burke Ramsey Think Of 'The Case Of: JonBenet'?

It seems that viewers are looking forward to all of the new series and documentaries looking into the murder of JonBenét Ramsey. But it's hard to tell what Burke Ramsey thinks of The Case Of: JonBenét Ramsey. For the longest time, no one had heard from Burke Ramsey, JonBenét's older brother, since the early days of the case, since he was just 9 years old at the time.

Now, leading up to the 20th anniversary of her death in December, CBS is running the long docu-series, promising interviews with people that haven't been spoken to before and other allegedly "new" insights into the case. But it can't be easy for the family to have to relive the case and the public scrutiny again, no matter what you think about the murder investigation.

As a child, Burke was interviewed by police after his sister's body was found and there were theories about her murder that circulated in the tabloids that the child might have been involved, but the entire Ramsey family was never charged and publicly exonerated of suspicion in 2008 by Boulder District Attorney Mary Lacy.

Burke has not spoke publicly about CBS's docu-series, but he did give an interview on Dr. Phil. During the interview, he spoke to some of the main theories surrounding the case, like those who wonder why the child didn't leave his room during the search for his sister or other theories circulated in the tabloids.

While he didn't speak to The Case Of: JonBenét Ramsey specifically, Burke added that he was coming forward now because of all of the attention surrounding the 20th anniversary of his sister's death. "I guess I kind of wanted to make it about remembering her and not just another news story," he said. " He added,

For a long time, the media basically made our lives crazy. It’s hard to miss the cameras and news trucks in your front yard, and we’d go to the supermarket sometimes and there’d be a tabloid with my picture, JonBenét’s picture, plastered on the front, or they would follow us around. Seeing that as a little kid is just kind of a chaotic nightmare, so I was pretty skeptical of any sort of media, like, it just made me a very private person.

For someone who's spent so long away from the media, those words were revealing in many ways. However, in a statement to Romper recently, Burke's attorney, L. Lin Wood spoke out in defense of his client, reminding viewers that, while gripping and dramatic, Burke was in no way associated with the original case. He reiterated that any suspicions that arose in the public sphere following his client's interview were false and used to gain publicity for the show or its counterparts:

In May of 1999, the Boulder District Attorney and the Boulder Police Department publicly confirmed that Burke Ramsey was not a suspect or even a possible suspect. Any statement conveying that this young man was involved in the brutal murder of his sister — his life's best friend — is unquestionable false and defamatory. Conveying this false accusation for TV ratings is unconscionable and will result in litigation in the future as it has in the past.

Unfortunately for Burke and his family, no matter what happens or what questions arise following the CBS documentary, it looks like September is going to be a hectic, public month.