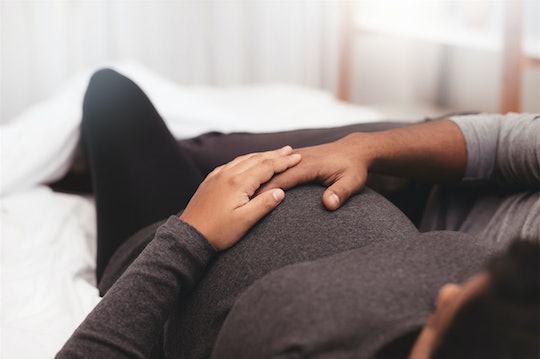 Here's What "Carrying High" *Actually* Means, According To Experts

In my experience, as soon as you announce your pregnancy, the speculation begins. The sex of your baby, your due date, your birth plan, and your future parenting decisions are all up for discussion, judgment, and scrutiny. Apparently. Even how you're carrying your pregnancy can become a topic of conversation, especially if you're carrying "high." But what does "carrying high" mean, anyway? And more importantly, what does it mean for your body and your baby?

For the most part, "carrying high" or "low" tells you more about your body and less about your baby. Sarah Fox, policy adviser at the Royal College of Midwives, told The Daily Mail that a woman's bump is as unique as the rest of her body. "Babies vary in shape and size, but nowhere near as enormously as bumps do. The bump of a 10 lb baby can look smaller than that of a 6 lb baby, depending on the shape of the mother's body." In fact, according to John Thoppil, M.D., an assistant clinical professor of OB-GYN at Texas A&M University College of Medicine, "carrying high" can tell you something about your abs. Dr. Thoppil told Fit Pregnancy, "When a woman carries high, her abdominal muscles are often in good shape, while lax muscles from age, previous pregnancies or decreased fitness can cause her to carry low." And according to Babble, if you're tall and have good muscle tone, chanced are you'll "carry high."

In other words, how your carry your pregnancy is a reflection of your unique, miraculous body, and can tell you very little about the fetus your body is constantly growing.

In fact, your level of fitness prior to procreation will probably determine how you carry your pregnancy. Kecia Gaither, MD, MPH, director of perinatal services at Lincoln Medical and Mental Health Center in New York City, told The Bump, "The manner in which a woman carries has everything to do with the tone of her abdominal musculature."

Which means carrying "high" or "low" can not, in fact, help you determine the sex of your growing baby. According to HuffPost, that's nothing more than an outdated pregnancy myth. Professor Steve Robson, the Vice President of the Royal Australian and New Zealand College of Obstetricians and Gynecologists, told HuffPost, "It's clear to say that a child's genitals has nothing to do with how the woman's body looks when she is pregnant." In other words, the idea that you can determine a fetus' sex by simply looking at a pregnant woman and analyzing the shape, size, and height of her baby bump, is as fictitious as it is potentially problematic.

Livestrong pointed out that sometimes pregnant women are not carrying high or low at all; it just appears that way due to a woman's individual size and body type. The site explained further when they reported the following:

How you carry can present some health and wellness complications that all pregnant women should be aware of, though. Livestrong reported that women who carry low can have more back pain as the weight of the baby takes its toll.

How you're carrying your pregnancy can also alert you to side effect of pregnancy is called diastasis recti. According to The Bump, "when the uterus grows upwards, mom-to-be’s 'six pack' muscles stretch and split open." Yes, that's about as comfortable as it sounds. BabyCenter explains further, reporting, "As your belly expands during pregnancy, the connective tissue gets stretched out, allowing the rectus abdominis to pull apart and separate vertically down the middle." If you have diastis recti, you can appear pregnant months, and even years, after you've given birth.

In the end, how you carry can't tell you much about the fetus growing inside you, but it can serve as a metric of your pre-pregnancy fitness level. And of course, if you ever feel more uncomfortable than usual, or are concerned about how you're carrying your pregnancy, contact your health care provider. That's what they're there for, after all.