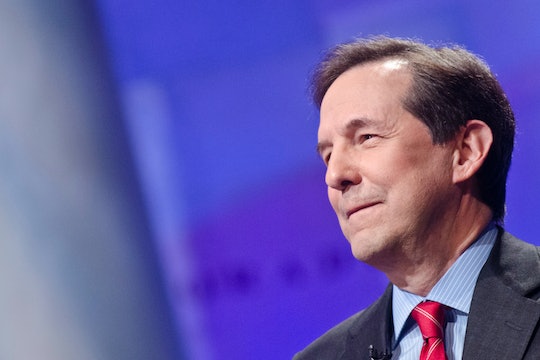 What Does Chris Wallace Think Of Donald Trump? The Fox Host Isn't Partial To Any Candidate

Given the state of cable news, it's easy to assume that an anchor has certain political leanings depending on where they work. But things aren't always as simple as party lines, despite what the candidates might want to accuse the media of. So when it comes to the final debate, what does moderator Chris Wallace, think about Donald Trump? That, too, is complicated. Wallace works for Fox News, which to many means that he's drunk the conservative Kool-Aid and that the Commission for the Presidential Debates chose him to "round out" the "bias" of the moderators. But, officially at least, the CPD doesn't choose moderators based on their political affiliations, and in Wallace's case, it would hardly matter at all, even if that were how things worked.

The process of selecting a moderator is a little more complex than first meets the eye. Moderators are chosen based on their merit as journalists. According to their criteria, the CPD chooses a moderator based on their familiarity with the candidates and the major issues of the election, experience in live television broadcast news, and an "understanding that the debate should focus maximum time and attention on the candidates and their views." Wallace, despite your opinions about the network he works for, fits all of those credentials.

Fox News has been more welcoming to Trump than other networks, perhaps because the candidate seems to disparage other cable news outlets with gusto. The Republican nominee is often featured on the network's morning shows and on Sean Hannity's primetime news program. Trump's also sat down with Wallace on Fox News Sunday more than a few times, one on one.

But according to Fox News, the news anchor is looking to "make his mark" now by moderating the final presidential debate in what will likely be a historic election. "If people say, 'it was a great debate and I don't remember you being there,' I will have done my job," Wallace said in a statement.

Just as NBC's Lester Holt or CNN's Anderson Cooper were selected as moderators for their lengthy records as broadcast journalists — and not because of their perceived biases — Wallace is known for being tough on his subjects in interviews (including Trump) and putting on a notable air of professionalism. When talking to Trump about spending this spring, for example, Wallace and his producers set up a "bear trap" for the candidate by predicting what he would say in response to questions and then showing the Republican candidate visuals. "Mr. Trump, your numbers don't add up," Wallace said, without a hint of sarcasm.

Recently, in light of the sexual allegations against Trump, Wallace has grilled Trump surrogates about their interview schedules and their talking points, most notably former New York City mayor Rudy Giuliani earlier this month. Wallace asked the Trump surrogate, point blank, whether the Trump campaign was hiding campaign manager Kellyanne Conway in light of the allegations. Wallace is tough, all around. He's a journalist.

But don't expect too much fact-checking from the moderator. Wallace told Fox News' Howard Kurtz, "It’s up to the other person to catch them on that. I certainly am going to try to maintain some reasonable semblance of equal time. If one of them is filibustering, I’m going to try to break in respectfully and give the other person a chance to talk."

So he's not pro-Trump. But he's not pro-fact checking either. Both of those things can be good or bad, depending on what you think the debates should be all about. Either way, it's a guarantee that Wallace will bring an air of professionalism to the entire night — and in an election like this one, that never hurts.