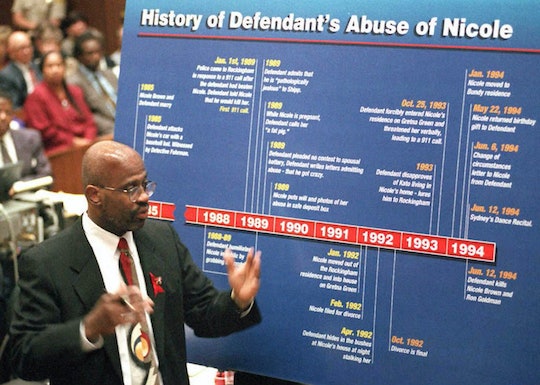 What Does Christopher Darden Think Of 'American Crime Story'? Chances Are, He Won't Weigh In

The People v. O.J. Simpson: American Crime Story may be stirring up a lot of fascination for those who lived through O.J. Simpson's trial and those who are new to it, but it's also making those who were a part of it relive a difficult period. The prosecution, who argued that Simpson was guilty of the murders of Nicole Brown and Ronald Goldman (for which he was acquitted), had it particularly rough, which makes you wonder: what does Christopher Darden think of ACS? The former Los Angeles deputy district attorney, who worked with lead prosecutor Marcia Clark, has yet to speak out about FX's new show, which is unsurprising.

The "trial of the century" was famous for having morphed from a murder trial to a trial on race, and as an African-American prosecutor, Darden was unfortunately caught in the middle. A write-up by the University of Missouri–Kansas City Law Department explained:

The fact that Darden was an African-American was significant because the Simpson jury was comprised mostly of African-Americans, Cochran had joined the defense team, and the victims were white. In bringing Darden on, the prosecution hoped to dispel the view that this matter was a racist 'white against black' prosecution.

After the Rodney King riots, though, it did seem like a "white against black" prosecution to many watching the proceedings. Sterling K. Brown, who plays Darden in ACS, said he himself saw it that way at the time in a KTLA interview. "I was a freshman at Stanford University when this all went down," he said.

When the verdict was rendered, I was living in this dorm called Ujamaa, which was the ethics theme house on campus. 50 percent African-American, 50 percent other. The black people rejoiced, the white people looked at us like, 'Why are you rejoicing?' And it was so interesting to see in that little mirocosm at Stanford University what was happening all across the country.

"The case became about race, and it didn't become about those two people, [Nicole Brown and Ron Goldman]," said Brown. He tried reaching out to Darden twice, but was met with no response, although he seemed understanding about Darden's reaction. As he told Salon: "I believe he was one of the more traumatized people at the outcome and the acquittal, probably even more than Marcia. He’s a black man, a proud black man who loved his community greatly, and who no longer felt welcome in that community."

Darden has, however, spoken about the Simpson trial in the past, and in 2012, he claimed Simpson's glove was tampered with by the defense. Simpson's current legal team has not responded to Romper's request for comment. Darden has also been open about the outcome of the trial, and on an episode of Larry King Live, he said, "I was harmed ... Would I have been harmed anymore in terms of my reputation, in terms of death threats, in terms of the way I was characterized in the press and in the black community? I can't imagine it having gotten much worse than it was."

"I was devastated and decimated by the trial," Darden also said during an Oprah: Where Are They Now? episode last year. "I've tried to move past it."

Romper has reached out to Darden for comment, but has yet to receive an answer. If Darden's way of moving past it has been to enjoy his private life and let go of the Simpson trial, however, all the more power to him.