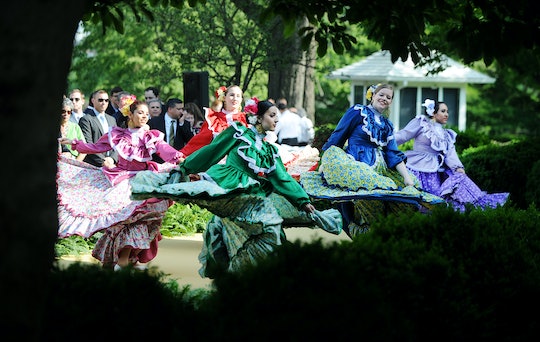 What Does Cinco De Mayo Celebrate?

Each year on May 5, many Americans of all different backgrounds celebrate Cinco de Mayo with tacos, tequila, and a whole host of inaccurate symbols. And in participating in the somewhat cultural appropriative festivities, it seems people what lost site of what Cinco de Mayo actually celebrates.

It's somehow become a "fact" among Americans that Cinco de Mayo is the celebration of Mexico's independence from Spain, akin to the United States' July 4 celebrations. But is that it? As it turns out, Americans' popular opinion is entirely wrong (shocking, I know). Mexico's Independence Day is September 16 and it does commemorate the beginning of Mexico's revolt against Spanish governance, according to Time and Date.

But even though Cinco de Mayo celebrations aren't related to Mexico's independence, the day is meant to commemorate a military battle. According to USA Today, Cinco de Mayo celebrates the day the Mexican army claimed victory over the French, led by Napolean III, at the Battle of Pueblá. Though the Mexican army beat the French that day, in that battle, the Cinco de Mayo battle wasn't even the battle that finally led Mexico to drive out the French, according to PopSugar Latina. So even though Americanc consider it a big holiday, it isn't all that important n Mexicao, outside of the state of Puebla.

In the U.S., Mexican-Americans (and many Americans of other backgrounds) use Cinco de Mayo to celebrate Mexican culture and heritage in general, according to the website for the History Channel. In cities like Los Angeles, Chicago, and Houston, which have large Mexican-American populations, celebrations include parades, traditional Mexican folk dancing, and authentic foods and music.

As noted in the previously-mentioned article from PopSugar Latina, however, the American version of Cinco de Mayo has unfortunately, become a day that includes spreading stereotypes about Mexicans and Mexican-Americans, a complete disregard of the day's true history, and plenty of drink specials. Also, given the true history, perhaps it should be obvious, but Cinco de Mayo only has to do with Mexico, as noted in a blog post on HuffPost. So don't necessarily assume those of Hispanic heritage outside of Mexico will celebrate the day as their own. They may, as many Americans do, but assuming that they will can imply that their heritages and histories are indistinct from that of Mexicans', which can be hurtful and is, of course, untrue.

Celebrating Cinco de Mayo with tacos and margaritas can be fun, but if you're going to celebrate, you may as well know what it is the day actually stands for — and be respectful, especially if the culture is not your own.