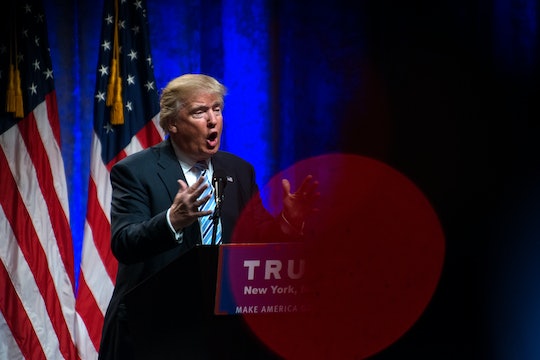 What Does "Covfefe" Even Mean?

The nation has woken up to find itself in a place completely different than when it went to bed on Wednesday morning, thanks in part to President Donald Trump. After a little late night tweet was sent out from Trump's personal account, the world was introduced to "covfefe," a term (word?) that would change the course of history (I kid, then again, do I?). So, what does "covfefe" mean? Even without knowing the meaning of the mysterious word, Twitter has had a field day with it, quickly making it a trending topic. (Romper reached out to the White House about the "covfefe" tweet, but did not hear back at the time of publication.)

If you're just waking up to a Twitterstorm of hilarious tweets about this mysterious word and still feel confused, then welcome to the club. As The Guardian writes, Trump tweeted just after midnight, eastern time, "despite the constant negative press covfefe." That was all he said, as if we a) were all supposed to know what covfefe meant, or b) someone grabbed his phone mid-tweet in a "Hey, you know no phones after 10 p.m." Both concepts are equally as fun.

Of course, the President's personal Twitter account has more than 31 million followers, and just a few of them are confused by "covfefe." And rightfully so, because what does it mean? (At the time of publication, Trump's tweet has not been deleted, though Twitter has had his back in screenshotting it, should it find its way to the trash bin in the morning.)

There is no dictionary definition for "covfefe," which makes the mystery a little more fun. What was he trying to type? Why did he hit send? Does he realize the irony of talking about bad press in the same tweet that is, ultimately, leading to even more press? Oh, the tangled webs we weave.

Late Night Twitter has, ultimately, found this as the platform for a new stand-up routine, although many (if not all) are just as confused about the meaning of the word.

("Covfefe" does not mean "I resign" in Russian.)

With that, we may never know what "covfefe" was supposed to be (although, as some Twitter users point out, it may have been intended as "coverage"). But may this be a reminder that sometimes all you need is a president with a dipping approval rating, a made-up word, and Twitter to bring the world together.