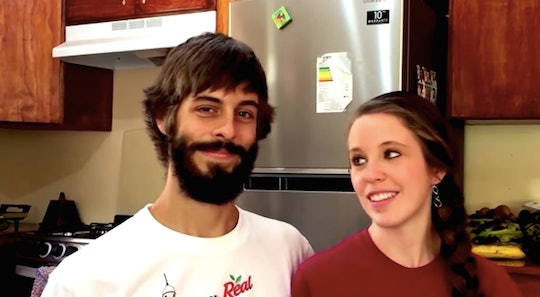 Here's Why Derick Dillard's Work Has Caused A Bit Of Controversy

Out of all the Counting On stars, Jill Duggar's husband, Derick Dillard, might be the most controversial cast member. Fans haven't been too happy with his tweets promoting ultra-conservative politics and his repeated jabs at the transgender community, and many believe that Dillard is becoming more extreme in his views. Given all the controversy Dillard has stirred up in recent months, it makes sense that fans want to know what Derick Dillard does for work and how he supports his family outside of TLC.

In August, Duggar and Dillard announced that they wouldn't be returning to Central America to complete their missionary work, according to People. The announcement came just a month after Duggar gave birth to the couple's second child, Samuel, and many fans supported their decision to remain in Arkansas: raising a newborn in a unfamiliar place could be taxing and super stressful.

Following Duggar and Dillard's news, people wondered what they'd do for work in their home state. Some theorized that Dillard would return to a job in accounting; he worked as a tax account for Walmart from 2014 to 2015, according to LinkedIn. Others assumed that Duggar and Dillard would live off their Counting On cash, which would probably be possible given that the family earns anywhere between $6,000 to $10,000 per day of filming for an episode (each episode spans about four days), according to InTouch Weekly.

As it turns out, however, Dillard and Duggar decided to continue to their missionary careers in the United States, and the details of their work are murky at best. According to LinkedIn, Dillard continues to work at Dillard Family Ministries, and he lists his role as "developing human relief efforts and investing in people spiritually through communication of the Word of God, which is powerful unto salvation." The Dillard family website, however, states that Dillard and Duggar have been supporting C3 Church ministries, and that Dillard is currently a student at the Cross Church School of Ministry.

The problem is, some fans have speculated that Dillard wasn't running an ordained ministry during his time at Dillard Family Ministries, which means he didn't have the backing or sponsorship of any church or regulatory organization. It's an important detail, because ministries that aren't ordained lack the checks and balances that ordained ministries have; essentially, if you donate money to a non-ordained ministry, there's no guarantee that your money is going to the ministry's work.

A source allegedly close to the Duggar family said of Dillard's seemingly now-defunct missionary, according to The Hollywood Gossip:

They go on a mission, they're not sponsored by any church whatsoever, and they go, and they solicit money from people, they ask for donations ... [Derick] is not an ordained missionary. They more or less just go over there on their own, and I'm wondering if TLC isn't footing the bill just for coverage. Just so they have something to sell.

Dillard did not immediately respond to Romper’s request for comment.

Since it's unclear if Dillard was running an ordained ministry, it makes sense that fans were suspicious when he tried to raise money for Dillard Family Ministries in August via the charity website Pure Charity. Dillard asked fans to help him fulfill "various missions opportunities…including trips for Gospel-advancement and humanitarian work in Northwest Arkansas, North America, and abroad," according to The Christian Post. Shortly following Dillard's initial post, the fundraiser was shut down because it reportedly violated the site's terms of use, and fans speculated that it was taken down because Pure Charity is designed for people associated with official charities and organizations as opposed to individuals, according to The Inquisitr. Pure Charity did not immediately respond to Romper’s request for comment.

Since the controversial fundraiser, Dillard hasn't asked fans for more money. It looks like Dillard's current job is being a full-time student a Cross Church College Ministry, which is a good thing if he wants to stay involved in missionary work. And if that doesn't work out, Dillard and Duggar can always fall back on TLC.