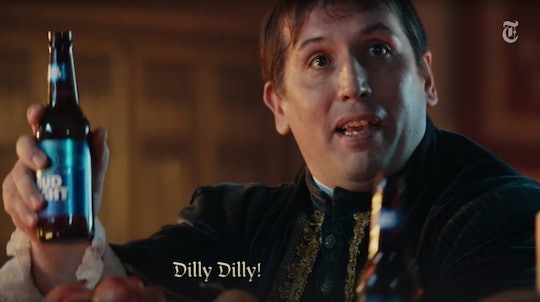 WTF Does “Dilly Dilly” Mean & Why Does Everyone Keep Saying It?

So, I'm going to level with you all: I am not a cool girl. I hate beer, I don't understand football, and I love salad. So when my boyfriend introduced me to the phrase, "Dilly Dilly," I honestly thought he was having a stroke. So, what does "Dilly Dilly" mean? The Bud Light Super Bowl commercial has some interesting roots, although the creative minds behind the commercials were definitely thinking outside of the box.

In case you don't know what I'm talking about, (first of all, consider yourself lucky), allow me to fill you in. Basically, beer company Bud Light decided to shake things up with their advertisements in the fall of 2017 and thus released a commercial centered around a medieval setting in which people all try and find beer, I guess. It's all kind of confusing. But, that's not even the main point, y'all. During the first "Dilly Dilly" commercial, members of the court present the king with Bud Light, to which he responds, "You are a friend of the crown, Dilly Dilly!" And everyone else in the room echoes that strange phrase.

After that first commercial, Bud Light released a slew of "Dilly Dilly"-themed ads, prompting many to wonder what the word even means.

Well, it's actually pretty complicated. According to Merriam-Webster,

A dilly is delightful, and that's not a coincidence. The noun comes from an obsolete adjective dilly that means "delightful," and that likely came about by some nipping and tucking of the word delightful itself (though technically the process is more properly called "shortening and alteration").

But that isn't the only definition of the word "dilly," and it also seems to be a little different than repeating the word as if cheering something on, because, ya know, beer. So, upon further investigation, I found that another prominent dictionary, the Oxford English Dictionary, defines "dilly," as,

An excellent example of a particular type of person or thing.

(Don't worry, I'm just as confused as you are). And what's more, it seems as though the creative masterminds behind the Bud Light commercial's concept were actually going for something a bit more ambiguous when they went with "Dilly Dilly" as their catch phrase.

Speaking to Thrillist, Andy Goeler, VP of Bud Light, said that the concept wasn't meant to be something straight from the books. "The dictionary definition of the word differs from our definition slightly, but to us, it was a sort of medieval form of 'cheers,'" he said. "The phrase has taken on a life and a meaning of its own, thanks to fans of the commercials — and we're more than happy to just be along for the ride."

I mean, seriously, saying that the phrase has taken on a life of its own is just about the biggest understatement of the century, y'all. My boyfriend sometimes just says it when he eats a really good piece of pizza. I don't get it, but I continued my investigation.

So, what we know now is that "Dilly Dilly" is basically bro-code for "thanks for the beer, man, way to be." But like, why is it such a thing? Well, Anheuser-Busch InBev's Chief Marketing Officer, Miguel Patricio might just have the answer for me. Also speaking to Thrillest, Patricio explained, "'Dilly Dilly' doesn't mean anything. That's the beauty of it," he told the website. "I think that we all need our moments of nonsense and fun."

Yeah, it literally doesn't mean anything. But whatever, it makes my boyfriend, and millions of other beer-lovers happy, so I guess it's alright. At least now I can pretend that I get it. Dilly Dilly, y'all!