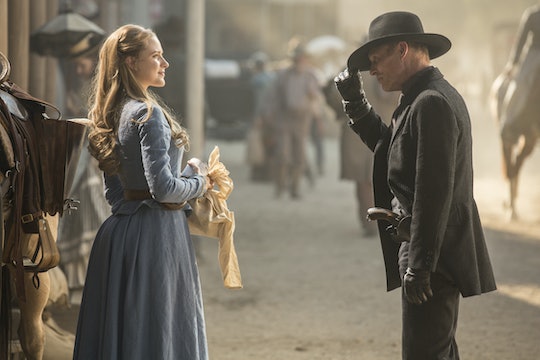 What Does Dolores' Can Mean On 'Westworld'? This Small Detail Is Telling

HBO's latest sci-fi/western drama Westworld is more than living up to its much-anticipated hype with two strong opening episodes that are already proliferating wild fan theories. Between trying to figure out who's an android "host" versus who's a human "guest," what the shady corporation behind the park is up to, and what in hell is going on with the pseudo-sentient robots, the series is raising way more questions that it's answering. And there are so many tiny details to consider that it's impossible to project a single outcome. So what does Dolores' can mean on Westworld? Like the flies, it's a very small detail that provides a huge clue as to how Westworld works.

The pilot episode uses Dolores to set up how each host is on a "track" that resets every day. We see Dolores wake up and start her day four times in that first episode, each time with a variation that changes the outcome of her journey. Every morning, she heads into the town of Sweetwater from Abernathy Ranch, where she lives, to buy supplies, and each time she loads up the saddle bag on her horse with groceries, she drops a can of condensed milk. This seems to be what invites variation into her script.

The first time she drops it, we see fellow host Teddy pick it up, establishing their star-crossed lovers storyline in the script. One time, she misses Teddy and instead, the Man in Black picks it up for her, leading, later, to her demise (for that day, anyway). In the second episode, we see William, whom we believe to be a guest, pick it up, which is the first interest he shows in engaging with Westworld, after a cautious introduction. Is it possible that everyone who picks up Dolores' can is connected in some way?

We know very little about the Man in Black, but there are already theories cropping up that he used to be a host who has become self-aware, or that he was a guest who became an android-hybrid after being involved in the mysterious "critical failure" the park experienced 30 years ago. He claims to have been coming to the park for 30 years, which many viewers think isn't a coincidence. Was he designed to be a romantic foil to Teddy? Another theory posits that the second episode took us into a time jump and that William is a younger version of The Man In Black, doomed to get stuck in (or addicted to) the game forever. Either way, the fact that we keep returning to Dolores' can moment again and again in the series points to some major significance.