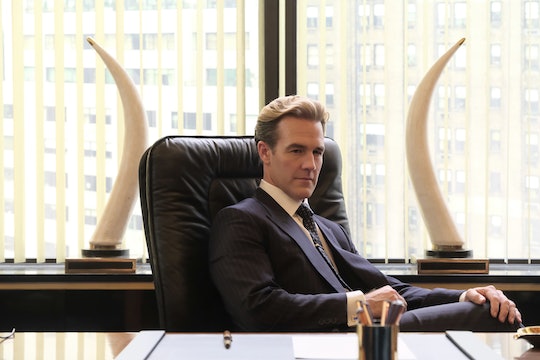 Donald Trump Was Almost A Character On 'Pose'

Donald Trump comes up a first times in the premiere episode of Pose. Matt Bromley and Stan Bowes, the characters played by James Van Der Beek and Evan Peters respectively, both work at Trump Tower. They reference Trump's background and his wealth, and he's positioned as something of an aspirational figure to the white men who work for him. But has Trump himself had anything to say about the show? What does Donald Trump think of Pose?

There's no indication that he thinks anything of it, or even knows that it exists. Though he always seems ready to take to Twitter to comment on television, so far Pose has escaped his notice. Publicly, Trump hasn't expressed any opinion about the show at all. That could be because he isn't actually a character on the show, even though several of the characters mention him throughout the first two episodes of the season. Trump is strictly offscreen on Pose and it looks like it will stay that way, though that wasn't always the plan.

Initially, Van Der Beek's character was supposed to be a younger version of Trump. Co-creator Brad Falchuk told Entertainment Weekly that he'd had a lot of fun writing dialogue for the fictional Trump, but ultimately the creatives behind the series decided to go a different way.

It seems as though the 2016 election happened while the show was still in production, and that changed co-creator Ryan Muphy's decision to include Trump. As he said to Entertainment Weekly:

The election happened, and we're like, 'Nobody wants to see him.' And then it was going to be an actor impersonating somebody who's already a caricature, and I thought, 'Well, that's just going to take you right out of the show.'

That resulted in Van Der Beek playing Matt instead, Peters' slimy boss who does coke in his office, advises him about affairs, and praises Stan's New Jersey background. He claims Trump would appreciate it, too, since he's from Queens. No word on whether or not Trump actually does admire fictional Stan's home state.

Though Trump is not a part of the series in any way, his presence is still felt because he typifies one side of the city during the 1980s. As Van Der Beek said in an inside look into Season 1, on the one hand New York had the vibrant LGBTQ subculture of the balls, but "on the same tiny little island, there was this huge Trump-era real estate wealth boom." Trump represents a lifestyle the main characters are prevented from accessing, though they can emulate it in the ballroom. The LGBTQ people of color on the show are denied the same opportunities of the wealthier white characters, but they can still carve out there own place in the world and celebrate themselves for who they are.

In trying to depict those two aspects of the city, but not have the show dominated by Trump's presence, Murphy and company chose to keep in references to Trump while disposing of the fictionalized version of him. In the same EW interview, Falchuk said. "He is the representation in terms of all that is wrong in terms of inauthenticity. But the contrast between someone like Blanca [played by Mj Rodriguez] and someone like him could not be greater. I think it was important we felt that contrast."

Pose is just getting started, so if it continues to mention Trump in passing then he may eventually decide to say something about it. But he's an incredibly small part of the series and never appears onscreen, so it might just fly under his radar while he focuses on politics instead.