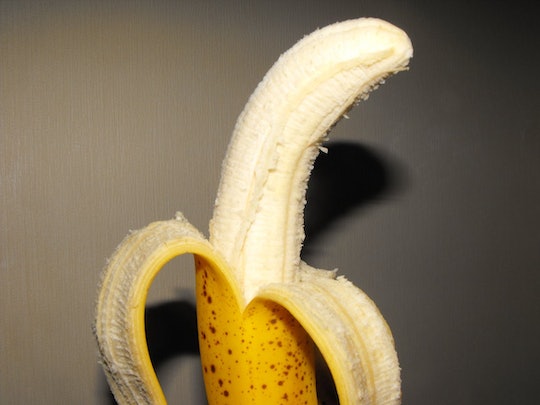 What Does An Erection Feel Like? The Science Behind That Wood

In “The Hamptons” episode of Seinfeld, the men try to explain the concept of shrinkage to Elaine, to which she replies, “I don't know how you guys walk around with those things." Her sentiment probably captures the way many women think about men and their anatomy. Even well into adulthood, it’s pretty normal to feel head-shakingly baffled by them. And cis women all over the world have probably wondered what does an erection feel like, anyway? Is it like a water balloon down there or what?

Here are the mechanics behind an erection. First, something triggers a sense of arousal in a man. Then, the “arteries relax and open up to let more blood to flow in; at the same time, the veins close up," according to WebD. "Once blood is in the penis, pressure traps it within the corpora cavernosa. Your penis expands and holds the erection." So it kind of is like a water balloon.

Aside from some members of the trans community, women will never completely know what those sensations are like. But here are a few best efforts to explain erections to those of us who don’t have that equipment. Also, it’s 100 percent acceptable to giggle while reading the rest of this. I dare you not to.

When men discuss their erections, awareness seems to be a common theme. “The best I can describe it is that typically throughout the day, you're not aware of your penis any more than you are any other body part," Frank Kobola told Cosmopolitan. "When you pop a boner, there's this sudden hyper-awareness of your penis. It's like your dick got super-high." Apparently it becomes way more noticeable during this time.

And different circumstances can result in different types of erections. The so-called "morning wood" ones can feel different from arousal erections. "REM erections are triggered by a different part of the brain than erections that result from sexual arousal," Paul Joannides, psychoanalyst and the author of the Guide To Getting It On, said in Psychology Today. "This means that psychologically, these two different types of erection have little, if anything, in common." He even gave a sex survey so men could explain this difference, and morning erections were described as "in the way," "a nuisance," and "rarely sexual." So not all erections are created equal.

Is There A Female Equivalent

Is "ladyboner" just a figure of speech? Not entirely. "Because of the engorgement with blood during sexual arousal, the labia minora become turgid, doubling or tripling in thickness, as reported in in Clinical Anatomy. "Therefore, male erection equals erection of the female erectile organs." While no one will accidentally notice your turgid labia minora (and if they do, then they need to get out of your business), this function of arousal may act as the female equivalent of an erection. Maybe.