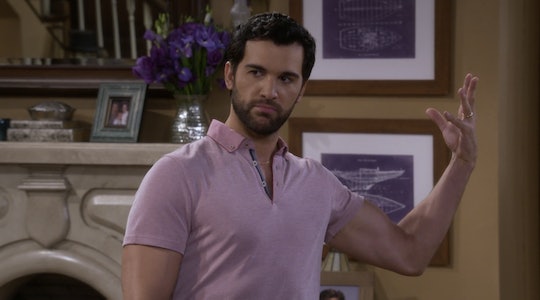 What Does Fernando Do For A Living? He's A Man Of Many Trades

There are many new characters to meet in Fuller House, Netflix's newest original series, and the most interesting of all may be Kimmy's ex-husband Frenando. An Argentinian, Rico Suave-like character, Fernando is a man of mystery when we first meet him. All we know is that he cheated on Kimmy (with multiple women, mind you.) But after a few episodes, viewers learn a little bit more about the man's backstory. Like what Fernando does for a living.

In episode seven, it is revealed that Fernando doesn't have the typical desk job. Instead, he is involved in "the dangerous world of auto racing." And though that makes him pretty cool in daughter Ramona's eyes, Kimmy isn't so keen on his career choice. Probably because, in attempts to bond with his little girl in a later episode, he takes her on a drive around the tracks. Bad ass? Absolutely! Good parenting decision? Eh, probably not. Though, in his defense, the two used a training car with two steering wheels. That's at least sort of responsible, right?

But that's not the only way Fernando brings home the bacon. Before he took on a life behind the wheel, he was behind the blow dryer. Or as he puts it, "the dangerous world of women's hair dressing." In fact, that's how he mey everyone's favorite next door neighbor. When reminding D.J. of his hair styling roots, he noted that, "Kimberlina wanted to be a dirty blonde and I happily obliged." (Yeah. . . I know. TMI) And based on how he styled Ramona's hair for her birthday, he has some skills with the scissors.

But is his career enough to woo Kimmy back? Highly unlikely. But we're happy to watch him try.