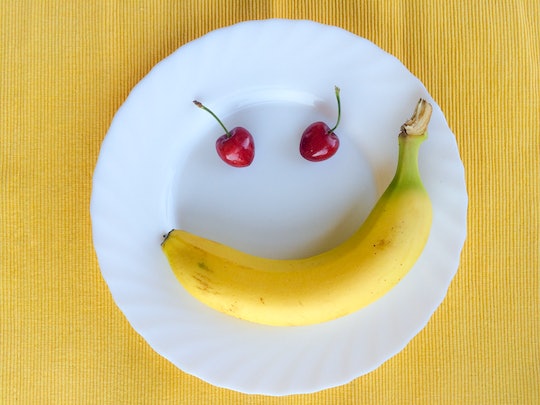 So That's What All Those Fruit Emojis On Snapchat Stories Means

You may have seen a few more cherry, pineapple, or blueberry emojis pop up on social media lately, so what exactly does fruit on Snapchat Stories mean? Well, they apparently serve as a code for your relationship status.

The trend actually dates back to Christmas 2016, as social media blog Wojdylo reported at the time, and was created by groups of girls as a way to "confuse" boys. It's a teenager thing, as one Reddit thread from 2016 put it, and it's apparently resurfaced once again. "Did i miss the memo about posting a fruit emoji on snapchat," one Twitter user wrote on April 16, while another said, "why is everyone posting a fruit emoji/sticker on their snapchat story?"

So, as it's apparently a thing once again, according to one Twitter user's explanation, here's the fruit emoji code so you can be in the know:

According to a Reddit thread, once the girls behind the Snapchat fruits realized the code had been broken, it evolved into other emoji symbols like animals and candy. If you're seeing animals on Snapchat Stories, Reddit user "jrrullo06" posted that pig symbols mean "talking to someone," a panda means "single," a whale means "it's complicated," a bird means you like someone, and a cow indicates you're taken. Only time will tell if the animal and candy codes will resurface again, too.

If the purpose of the fruits was to confuse people, it has worked. Twitter users are very confused why they’re seeing fruit emojis on their Snapchat Stories again. "The girls are doing that fruit thing on Snapchat again, aren’t they,” one Twitter user said.

So the next time you see fruit, animals, candy, or other emoji trends on Snapchat Stories, just know it's probably a group of teenagers trying to be funny and keep themselves occupied.

More Like This
Google Will Let You Block Ads About Pregnancy & Other Sensitive Topics
Parents Who Ran Marathon With 6-Year-Old Share Statement After CPS Visit
Gov. Abbott & Other Republicans Condemned President Biden For Feeding Immigrant Babies
Why Gwyneth Paltrow Trolled Us All With $120 Gem Stone-Encrusted Luxury Diapers

This article was originally published on Dec. 29, 2016