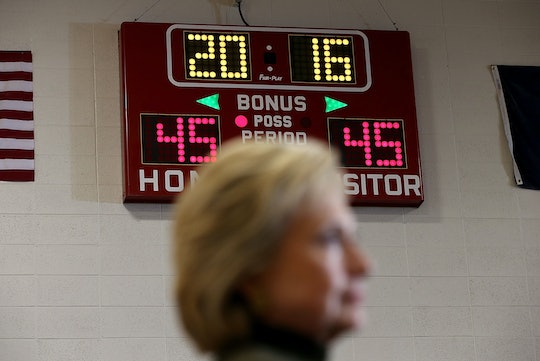 What Does Higher Turnout In Iowa Caucuses Mean? In The End, It Really Depends On The Candidate

The one big takeaway from Tuesday night's Iowa caucus was the incredibly high voter turnout. High voter turnout means one of several things of course, different for each respective candidate. Up until Tuesday afternoon, candidates from both parties were still urging voters to come out in groups, and no one was very sure if voters would even make it out, especially since there was a snowstorm predicted for later in the evening. But by an hour before the caucuses began, sites for both parties were already filling up — it was almost the only thing that most news networks could talk about.

Reporters were busy for most of the night, running up and down long lines that went back through building doors and into parking lots. Most reporters excitedly talked about the high turnout, especially in terms of first time caucus goers.

Part of that could be due to the encouragement of the candidates themselves. Earlier in the evening, Vermont Sen. Bernie Sanders tweeted at supporters to bring their friends, and even urged anyone who would be 18-years old in November to come out and caucus for him anyway. According to CNN, business mogul Donald Trump too handed out registration forms along with his flyers, just in case the sites ran out.

... Which may have been a very smart move: According to some reports, many sites did run out of forms since they had predicted a much lower turnout. Voting locations ended up closing much later than scheduled as well because of the long lines. All in all, Tuesday night's turnout was much higher than in 2012, when some sites only had a handful of voters.

Depending on who you talk to (or follow on Twitter) turnout like that could mean a few things for certain candidates. Sanders has been counting on high turnout, especially from younger voters. He told Today's Matt Lauer recently that his candidacy depended on it. "I believe that if we have a large voter turnout," he said Monday, "if thousands of people — many of whom who have given up on the political process, many young people who have never participated in the political process — if they come out, we're going to win." Anecdotally, that strategy seemed to be working early Tuesday evening.

In Iowa, Trump was also looking for first time caucus goers. His campaign had been all about energizing a base of Iowan voters that don't normally come out, and on Monday, it showed. If you believe the analysts, the high turnout could mean that Trump could really get ahead.

Looking at the caucus sites for the Democratic candidates, turnout for Senator Sanders was obviously greater than that for former Secretary of State Hillary Clinton. In 2008, President Barack Obama drove the sames sort of turnout and defeated her. Sanders told CNN on Monday that he didn't expect to match those kind of numbers.

But it's complicated. It's hard to assume what the demographics of the crowd really mean, although early polling from MSNBC seemed to favor Trump (43 percent of GOP caucus goers are first timers and 62 percent were evangelicals, compared to 38 percent first timers and 57 percent evangelical in 2012).

Early entrance polls and speculation from pundits who are busy running around Iowa high schools aren't exact science. It's not over until it's over. And at that point, it'll be all about New Hampshire.