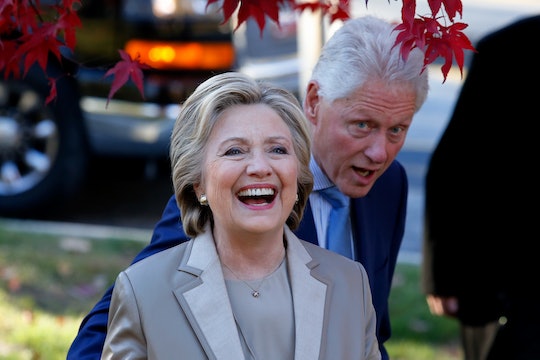 What Does Hillary Clinton Calling Trump To Concede Mean?

At around 2:30 in the morning, CNN broke the news that Hillary Clinton called Donald Trump to officially concede the race. What does Hillary Clinton calling Trump to concede mean? Essentially, it means that she and her team realized that there was no way for her to win this election, and she called to let him know that she was giving up to the rightful winner with grace.

Donald Trump, now officially known as the President-Elect, took to the stage a few minutes later to address his supporters who had gathered in New York City for the election. He let them know that he had just received a call from Secretary Hillary Clinton who had called to congratulate "us", meaning him and his supporters, on their hard-won victory. Because Clinton conceded, networks were able to officially call the election, though not all the votes had yet been officially counted. This also means that there is no fear (or hope) of the Clinton camp demanding a recount of the ballots just to make sure that Trump really did win. In this case, the results were clear enough that it was impossible to argue with them. Even without the key states of Pennsylvania and Michigan, Trump has defeated Clinton.

The tradition of losing candidates calling the winner to congratulate them began back in 1896 when William Jennings Bryan sent a congratulatory telegram to his rival William McKinley a few days after the election. This sparked a tradition of courtesy and sportsmanlike behavior following elections that is a show of good will and good grace, and hopefully helps to soothe whatever anger the supporters of the losing candidate might feel following the results. And given just how high tempers ran throughout the course of this very long race, I suppose it's good to keep this longstanding courtesy alive.

Of course, following this election, it may take more than a perfunctory courtesy phone call to assuage the anger of every Democrat and Clinton supporter in America, but it does prove that the election is over, at long last. It may not have turned out as many people expected, but now that American has spoken, it's time to look to the future and figure out what's next. The world will still not know what it's like to have a female president, but as always, Clinton rose above the disappointment to make that traditional phone call. And hey, there's always four years from now.