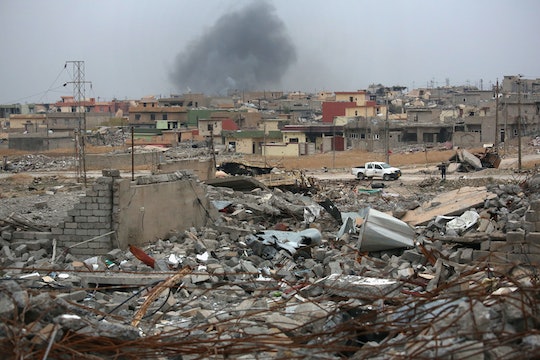 In the past month, ISIS (aka the Islamic State, aka ISIL, aka Daesh) has claimed responsibility for the downing of Russian Metrojet flight 9268, the bombings in Beirut Nov. 12, and the attacks on Paris Nov. 13, and it has released propaganda videos threatening both Washington D.C. and New York City. All of which begs the question: What does ISIS want exactly?

To answer that, you have to go back to its beginnings. Originally a faction of al Qaeda, ISIS formally split with the core group after a falling out between ISIS leader Abu Bakr al-Baghdadi and al Qaeda leader Ayman al-Zawahiri in 2013, according to ABC News. In June 2014, al-Baghdadi declared himself the caliph, or political and religious leader, of the Islamic State, and of all Muslim extremists.

ISIS members practice a branch of Islam that takes the Koran’s teachings much more literally than most other Muslims do. In fact, merely being a Shiite Muslim is viewed by ISIS as being an apostate, because ISIS considers Shiism an innovation, “and to innovate on the Koran is to deny its initial perfection,” as The Atlantic described the group's belief system. Also labeled apostates: every head of every Muslim nation, because they have “elevated man-made law above Sharia by running for office or enforcing laws not made by God.”

The caliph leads the caliphate, a territory ruled by — and only by — Sharia law. Per The Wire, under Sharia law, “Women are discouraged to leave the home unless necessary and they must be accompanied. Amputations are the punishment for stealing. Also, no dissent, drugs, alcohol, and cigarettes.” ISIS has been taking land in Syria and Iraq by force and now controls an area larger than the United Kingdom. Approximately 20,000 Muslims from 90 countries are thought to have traveled to the region to join ISIS. About 3,400 are from Western countries, including the U.S.

But what’s most disturbing about ISIS is their endgame: they’re hoping to bring about the end of the world. In fact, according to their interpretation of the Koran, it’s been prophesied that they will. They believe that in the Syrian city of Dabiq (an rural area they’ve already conquered), the armies of Rome (that's the West and everyone else who opposes them) will meet the armies of Islam (that’s them). ISIS will then defeat “Rome,” which will begin the apocalypse. An anti-Messiah called Dajjal will then arrive and kill all but 5,000 of Islam’s army. That’s when Jesus will arrive. Yes, that Jesus. He’s the second most important prophet in Islam, after Muhammad. Jesus will then slay Dajjal and bring victory to ISIS.

So there you have it; it’s all very simple. Conquer a country, rule it according to a very strict and very literal interpretation of a seventh-century book, and then kill everyone so they can meet Jesus. Sounds like quite a plan.