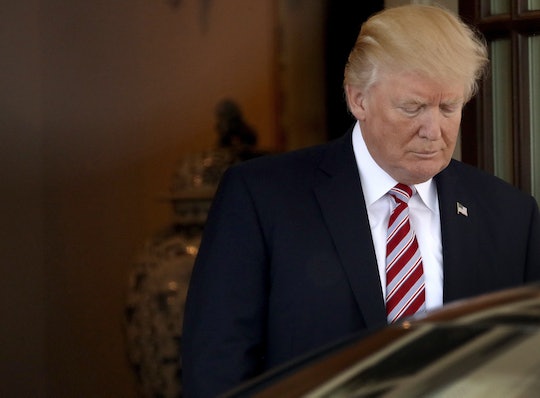 Are US-Israel Relations Now At Risk?

No president is perfect, in any way. Obviously, all 45 American presidents have had some amount of expertise, experience, and knowledge that helped them get elected, but that doesn't mean they didn't make their fair share of mistakes. But, some mistakes are bigger than others, namely when the president potentially puts the nation at risk. Unfortunately, our current president is already allegedly making some pretty big mistakes, as recent reports indicate. On Monday, it was reported that Trump may have allegedly spilled classified intelligence from Israel during a meeting with Russian Foreign Minister Sergei Lavrov. So, now, what does Israel think of Trump allegedly disclosing its intel to Russia? The latest insight into Trump's meeting with Lavrov could mean United States relations with Israel are at risk, though the nation's officials might not say as much.

According to The New York Times, "The classified intelligence that President Trump disclosed in a meeting last week with Russian officials at the White House was provided by Israel, according to a current and a former American official familiar with how the United States obtained the information."

With this new revelation, the question of whether Israel will react negatively to Trump allegedly disclosing confidential information is up in the air. For all anyone knows, U.S.-Israeli relations could be heading toward some dangerous territory.

Israeli Ambassador Ron Dermer, for his part, doesn't seem fazed by Trump's alleged disclosure. In a statement, Dermer said that Israel "has full confidence in our intelligence sharing relationship with the United States and looks forward to deepening that relationship in the years ahead under President Trump."

However, that doesn't mean that Trump's alleged actions aren't without their own perils. As many Republican lawmakers have noted, Russian officials now know more than they did before about the ISIS terror plot that was allegedly discussed in Trump's meeting with Lavrov. Virginia Rep. Barbara Comstock said in a statement,

We need to have immediate classified briefings on what occurred at this meeting so that Congress can at least know as much as Russian leaders and know the impact on our national security, our allies, and our men and women protecting our country.

And she's not alone. In a statement to Romper on Tuesday, Rep. Eric Swalwell, a member of the House Intelligence Committee, said,

The cost of President Trump's ties to Russia has become our national security. That's a price we can't afford to pay. Congress must unite, Dems and Republicans, to hold this president accountable and protect the American people.

For his part, Secretary of State Rex Tillerson is among those seemingly unmoved by the troubling revelation. In a general statement to Romper, State Department spokespersons speaking on behalf of Tillerson wrote,

During President Trump’s meeting with Foreign Minister Lavrov a broad range of subjects were discussed among which were common efforts and threats regarding counter-terrorism. During that exchange the nature of specific threats were discussed, but they did not discuss sources, methods or military operations.

Just how much Israel may be disturbed by this new information is a bit unclear, despite confidence in the nation's official responses. Only time will tell whether any alleged actions out of the White House will hurt that longstanding relationship.