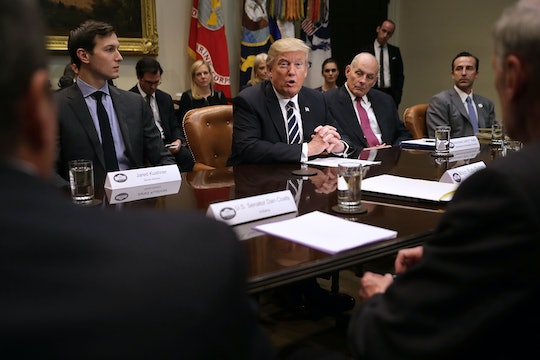 Here's What An Executive Order Actually Does

We're just over a week into Donald Trump's presidency, and already, our new commander in chief has issued a wide array of executive orders, ranging in subject from the military to travel bans and everything in between. So far, Trump has issued a total of seven executive orders, starting with motions to repeal Obamacare, and, most notably, to temporarily ban entry into the United States by people from seven nations, all with a majority Muslim population. Of course, Trump has also issued several presidential memorandums, but these executive orders are different, and have somewhat of a harsher impact. But, what does issuing an executive order actually mean? It isn't as rock-solid of a decree as you would think.

Fortunately (or maybe, not so fortunately, as our Republican Congress doesn't seem to want to oppose Mr. Trump at all) we have these things called checks and balances. You see, just because President Trump issues an executive order, that doesn't mean his word is law, although the latest executive order and consequent chaos that ensued in airports across the country this weekend might make you believe otherwise. But don't let that scare you. Y

Laws can only be made and passed by Congress, and even though Trump's executive orders might have some immediate effects, they're not exactly set in stone.

At its most basic level, an executive order is simply the president telling agencies what he wants them to do. So, if we take a closer look at "Executive Order: Protecting the Nation From Foreign Terrorist Entry Into the United States," we can see that, technically, no law has been made.

However, because executive orders do have the power to place a priority on issues on which the president deems as being crucial to the nation's security, or economic well-being, they can be powerful, if worded wisely. Still, all EOs are subject to inspection by the law, and can be fought.

But with a large array of advisors surrounding him — experts in law, business, and bending the ethics and wills of others — Trump certainly is in the position to issue EOs that do have a lasting, powerful effect.

As noted by The Washington Post, Trump's executive orders seem to have one distinct point of origin, that Trump is "legislating by executive order" — basically, what a president does when Congress won't comply with his wishes."

While many see the large number of orders as a threat to our democracy, and pointing to a trend of autocracy, we should keep in mind that Obama also issued a high number of executive orders at the start of his presidency, with similar caveats.

So, are Trump's executive orders troubling? Yes. But are they the actions of an egotistical dictator? Not just yet.