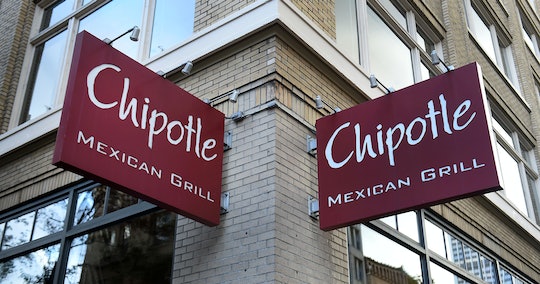 This Is Why You're Craving Chipotle During Pregnancy

I'm not one given to super strong cravings when I'm pregnant — frozen blueberries are about as crazy as things get for me — but I have a friend who absolutely craved Chipotle nearly every day of her second pregnancy (specifically the rice, go figure) and it got me wondering. What does it mean if you crave Chipotle during pregnancy?

According to Dr. Sherry Ross, a Santa Monica OB-GYN and women's health expert, food cravings occur in 50 to 90 percent of pregnant women. In an interview with Romper, Ross explains that spicy foods are among the most frequent cravings of the gestating crowd, hence the sudden urgent interest in Chipotle you may be experiencing. And although the spicy factor doesn't explain my friend's devotion to cilantro brown rice, it can't be denied that pregnant taste buds definitely like to party, and Mexican food is a yummy way to get those spices in.

Ross adds that while myths abound regarding food cravings and the gender of your baby, they are really just that — myths. But for the record, spicy cravings are said to indicate a boy, while sweet or dairy-heavy cravings point to a girl. My friend who craved Chipotle ended up having a girl, but then again the craving wasn't necessarily for spice in her case. So maybe the myth stands.

It's also not unusual to crave a very specific food — like Chipotle — when you're pregnant. Deborah Bowen, Ph.D., a public health science specialist, told Parents that these types of cravings are probably less about getting your baby nutrients than psychological and environmental factors. For instance, women may be more likely to crave pickles than chips — two equally salty foods. If your baby just needed more salt, wouldn't you crave the two foods equally? In the same article, Daniel Fessler, an anthropologist, told Parents that American women are taught that pregnancy is a time when you're allowed to eat foods you normally wouldn't, which may explain why American women crave chocolate but European women do. (Maybe if we didn't teach non-pregnant women that certain foods are forbidden, cravings wouldn't be as strong, you know? Just saying.)

Pregnancy should be a time of celebration, and enjoying the foods your body asks for — well, let's be honest: demands — can be a fun part of that. Just don't forget that you're allowed to eat what you want in your non-pregnant life, too. Everything is better with salsa.