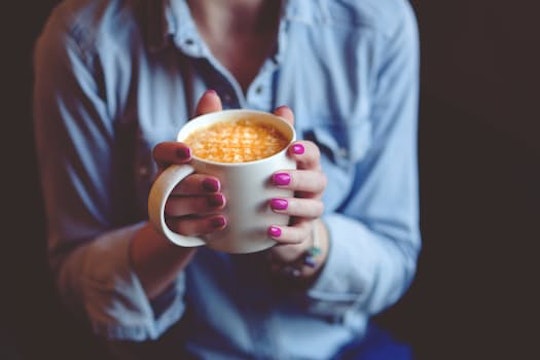 This Is Why You're Craving Coffee During Pregnancy

During pregnancy, my relationship with food was — intense. I blissed out over pasta, despised splitting appetizers at restaurants, and dreamed vividly of breakfast every night before I fell asleep. Occasionally, the desire for something salty — olives, potato chips, roasted seaweed — hit me like a Mack truck. But no two pregnant women are alike, and once that first trimester fatigue hits, you may find yourself craving some caffeine. But do cravings have meaning, and what does it mean if you crave coffee while pregnant?

It's tempting to assume that pregnancy cravings mean your body needs a certain nutrient, but science doesn't support this widespread idea. A recent study in Frontiers in Psychology noted that the most desired pregnancy foods — sweets, high-fat food, and fast food — contain plenty of calories, but few nutrients. The truth is that, at heart, cravings are a cultural and psychological phenomenon. Thus, I didn't crave french fries during my pregnancy because the baby needed potatoes, but because I ate fries as a kid (making them comforting), and because pictures of golden, greasy goodness are everywhere in our food-obsessed culture. The fact that fries are a "forbidden" food only added to their appeal.

Telling yourself certain foods are off limits can actually make them more desirable, and contribute to cravings. As nutritionist Ilyse Schapiro tells Romper, if you're craving coffee, it might be because you've been told to limit your intake.

Anna Lebsack, RD, LD, a dietician and nutritionist with Park Nicollet clinics, explains in an email interview with Romper that you may also be craving that mocha latte because pregnancy is so draining. "Your body is working extremely hard to build and sustain that little one growing inside you and exhaustion (especially during the first and third trimesters) is normal," writes Lebsack. "While you don’t have to put away your coffee cup altogether, it’s recommended you limit your caffeine to no more than 300 milligrams each day. This means you can still safely drink roughly two cups of coffee, tea, or soda daily."

Beware of coffee shop concoctions, however. As Lebsack notes, lattes, mochas, and espressos contain more caffeine than regular coffee, and Live Science reported that flashy Starbucks drinks, like the Unicorn Frappuccino, are loaded with sugar.

According to Lebsack, non-food cravings, known as pica, are warning signs. Strong desires for ice chips, laundry soap, dirt, or rocks can indicate an iron-deficiency, and the American Pregnancy Association recommended calling your doctor if you experience them. Otherwise, cravings may have no intrinsic meaning — other than hunger. To combat hunger pangs that inevitably lead straight to the snack aisle, Lebsack shares timeless advice — "Avoid skipping meals . . . and limit sugary foods as much as possible to avoid blood sugar swings."

Cravings matter, and are well worth our attention, because pregnancy weight gain is now a matter of public health. According to the Centers for Disease Control and Prevention (CDC), recent studies have shown that 48 percent of women gain more than the recommended amount of weight during pregnancy. As a result, scientists and journalists eager to pin childhood obesity on someone are mad at pregnant moms.

I gained too much during pregnancy, and with the help of the internet, I felt awful about it. Today, with a bit of distance between me and my raging hormones, I realize the problem is bigger than me. Pregnant women shouldn't be blamed for reaching for the cookies that comforted them in childhood. After all, they're wandering through supermarkets brimming with addictive, sugary junk, and driving past billboards with pictures of frothy milkshakes every day. So as long as your doctor hasn't told you to lay off the caffeine, enjoy that coffee craving. After all, pregnancy fatigue waits for no one.

More Like This
What Foods Fight Nausea During Pregnancy?
14 Recipes For Sick Kids When Everyone's Tired Of Canned Soup & Crackers
OB-GYNs Explain The Connection Between Stress & Miscarriage
Diastasis Recti Exercises You Can Do At Home To Heal Your Abdomen
What Parents Are Talking About — Delivered Straight To Your Inbox