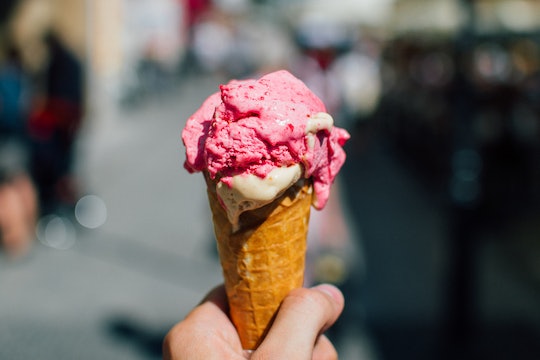 What Do Ice Cream Cravings Mean?

When I was pregnant with my first daughter, all I wanted was ice cream — all day, all night. I gave myself a free pass to fulfill all my food cravings, which was probably not the best idea, because I ended up gaining a lot of weight that I'm still struggling to get rid of. I never thought much of the food cravings, and assumed they were a normal part of pregnancy. Some women crave pickles during pregnancy, and others crave fish. So what does it mean if you crave ice cream while pregnant?

Food cravings during pregnancy don't have an exact reason behind them, especially when it comes to specific foods. Some experts believe that food cravings can indicate a mother's nutritional needs, but some experts see no links at all, explained Baby Center. There is only anecdotal evidence and there is no scientific explanation or data that supports why a mom would have specific food cravings during pregnancy. If my body craved what it needed during pregnancy, my anemia should have caused me to look towards more iron-rich foods instead of constantly craving ice cream. The truth is, you probably associate cravings with pregnancy and just want some ice cream, making you crave ice cream while pregnant.

Lots of people think that food cravings are associated with the sex of the baby. Old wives' tales and myths that pregnant women often hear can be fun to use when speculating the sex of the baby, so here's the deal with your sweet treat: the theory is that ice cream cravings during pregnancy are often linked to having a girl, according to Parents. Just remember, there's absolutely no science behind it, so maybe look up a boy name or two, just in case.

If you are craving ice cream during pregnancy, just remember to enjoy in moderation. The American Pregnancy Association (APA) suggested that you eat a well-rounded diet of nutritious foods so that you and your baby are getting proper nutrition, which is critical for your baby’s growth and development. The APA suggested the easiest way to do this is to eat from a variety of food groups including fruits and vegetables, breads and grains, proteins, and dairy.

Ice cream cravings may not have much meaning during pregnancy, but at least its a fun, yummy craving that you can give into once in a while. It's bound to make you, and your baby, very happy.