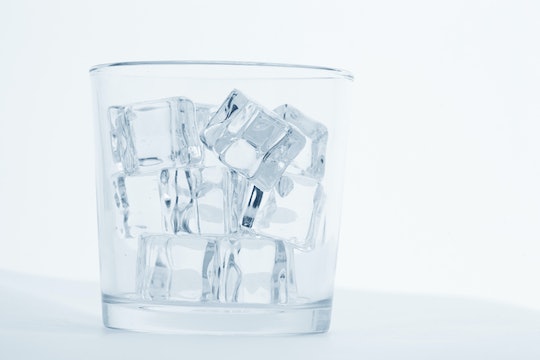 Here's Why You're Craving Ice During Pregnancy

Pagophagy or pagophagia. It sounds like some sort of deviant sexual proclivity, right? Like you absolutely must wear alpaca socks to knock boots or something. But no, it's a form of pica. What's pica? If you're wondering "what does it mean if you crave ice when you're pregnant," you probably already know pica, and in particular, pagophagia. Surprisingly, it is not a Queen Elsa/Jack Frost fan fiction forum, but it will be soon.

If you've ever headed to Sonic four times in a day because they have "the good ice" in January, in New York, while trying to figure out how to button your coat over your enormous belly, you might have pagophagia. Pagophagia comes from the Greek words "pago" for "frost," and "phagein," for "eat." It is the most-common form of pica, which is the almost undeniable craving to eat non-foodstuffs like clay, earth, soap, and chalk, noted the International Journal of Childbirth Education. It is theorized by many scientists to be related to nutritional deficiencies, and is especially common in pregnancy, according to the Maternal and Child Health Journal. But still, what does it mean if you crave ice while you're pregnant? The ice craving, that strong desire to make out with Frosty on the regular, is thought to be related to iron-deficiency anemia, suggested The Latin American Nutrition Archive.

But why? (Sonic's happy hour is not all day long.) Well, according to a study completed at the University of Pennsylvania, that ice chomping shocks your circuits, giving the anemic brain a boost, allowing for briefly clearer thoughts and a relaxation of the trigger that causes the craving. This would've been a much better reason to give my husband as to why I absolutely needed to eat the frost off of the ice cube trays other than "um, it tastes good?" Or, "I don't judge your eating habits Mr. I-eat-garlic-wings-dipped-in-honey-mustard, now do I?" (I absolutely judge that because it's disgusting.)

Alas, all that ice chewing is apparently terrible for your teeth, according to Salem Pediatric Dental. But moreover, just in case your craving for ice is, in fact, pica, you need to tell your OB-GYN. Anemia in pregnancy is no joke. It's linked to low-birth weight, premature birth, and maternal mortality, noted the American Pregnancy Association, and the Latin American Nutrition Archives suggested that pica is often something that goes overlooked. Many pregnant women assume it's fine and just think, "I like ice," but it can and should be treated, according to the International Journal of Childbirth Education. And, if you find that even after you're back to nutritional solvency, you still crave Sonic, it might be the tater tots. (Who am I kidding? It's for the good ice.)