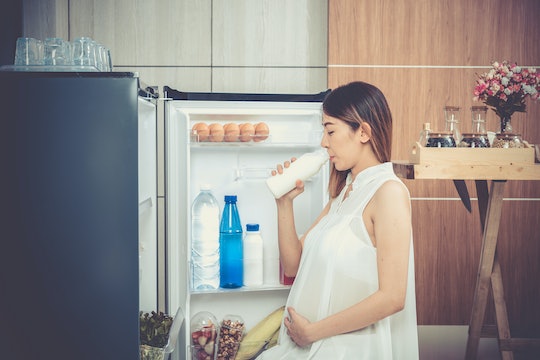 I'm smack dab in the middle of my second trimester and indulging in a tall glass of full fat milk multiple times a day — the colder the better. I've always liked milk, but this newfound craving for it definitely seems like a pregnancy thing. Speculation I've read online says that means my baby will be a girl, but the ultrasound I had last week has already debunked that myth. So what does it mean if you crave milk during pregnancy? Turns out, it's not as clear as I'd hoped.

Milk, and it's popular counterpart ice cream, is one of the most commonly craved foods during pregnancy along with fruit, chocolate, and salty snacks, according to a Parents magazine interview with Dr. Janet Pope, an associate professor of nutrition and dietetics at Louisiana Tech University in Ruston. So clearly I'm not alone in my bizarre readiness to track down the nearest Old Bessie and take a pail home to my refrigerator, but is there anything to read into, or should I take it at face value?

Pregnancy cravings have long been a source of discord among medical professionals. Are they physical or psychological? If physical, do they point to the baby's gender or indicate a nutritional deficit? Is it all just hormones? Why do they vary from culture to culture? I have so many questions, science.

According to Psychology Today (PT), many of the hypotheses about pregnancy cravings are hormone-based, which makes sense since hormones shift so drastically during pregnancy. But while hormonal changes might explain an increase in appetite, there is no adequate evidence to explain specific food cravings in pregnancy.

The author of the PT article, Omar Manejwala, Ph.D., suggested "That some pregnancy cravings may be related to a desire to 'cancel' out these undesired aversions (a sense of bitter that is a phantom smell or taste may be neutralized by ice cream, for example). This idea is supported by some research that suggests that salt sensitivity is decreased during pregnancy and bitter sensitivity is increased." So in that case, maybe my cravings for milk also explain my aversion to coffee?

The most common explanation is also the simplest: That your pregnant body is clearly letting you know which nutrient you need more of. If that's the case, then I've been lacking calcium like whoa. But again, the science on this isn't definitive — it's educated speculation at best. Whatever the reason, milk is a pretty healthy craving to be experiencing, so you and I can both feel good about reaching for the white stuff. Just remember to check your mirror for a mustache.