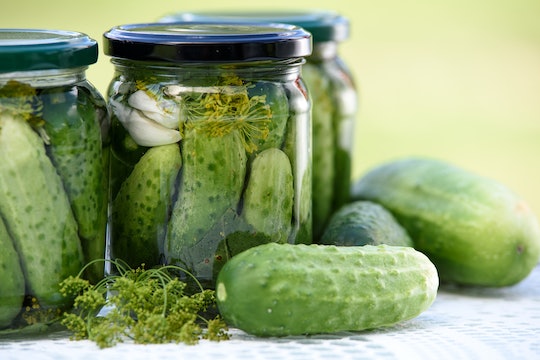 Why You Want Pickles During Pregnancy, According To Science

It's the quintessential pregnancy stereotype, is it not? And yet you just can't quit with the pickles. There is no shortage of myths that predict the sex of your baby based on what foods you're craving, but there isn't much scientific proof of the reliability of those claims. So what does it mean if you crave pickles while pregnant? It means your female body is rockin' this thing.

Pregnancy, and in particular the second and third trimesters, is like one long wild rumpus for your taste buds as every flavor is heightened for better or for worse. Yet despite the depiction in movies and television of pregnant women going ballistic with cravings, not every gestating woman will experience them at all, according to OB-GYN and author Sherry Ross of Santa Monica.

In an exclusive interview with Romper, Ross says that food cravings are believed to be caused by the hormonal and psychological changes a woman is undergoing during pregnancy, in addition to her changing nutritional needs. The most widely seen pregnancy food cravings within the medical community, she reports, are ice, spicy foods, pickles, potato chips, fruit, and ice cream. Ross tells Romper that pickles in particular seem popular because they appeal to several different cravings: vinegar, saltiness, and "crunch."

Research conducted by the University of Connecticut in Storrs, and reported in Parents Magazine, showed an increased preference for sour and salty flavors in pregnancy develops later, and an increased perception of bitterness manifests in the first trimester. It is believed that the appeal of sour foods in the last half of pregnancy helps ensure the woman gets a balanced diet and enough calories, while the craving for salt means that her increased sodium needs will be met to support her increased blood volume.

When it comes to gender prediction, keep in mind that unsubstantiated claims are really only accurate 50 percent of the time. But if you want to have fun with it anyway, Ross says the myth is that women who are carrying girls crave sweet foods, while women carrying boys crave sour and salty. So while you're stocking up on newborn diapers, it might not hurt to pick out some boy names.