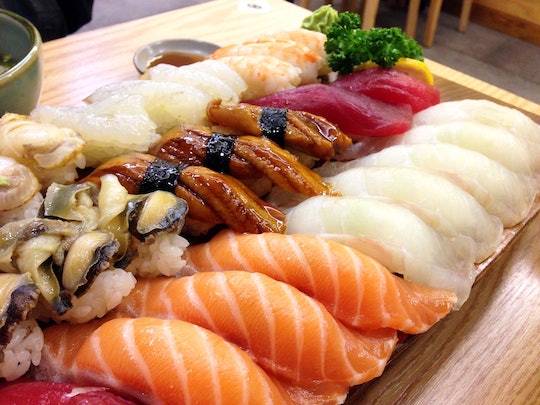 Here's What It Means If You Crave Sushi While Pregnant

I remember a vivid dream I had when I was especially pregnant with my youngest. I was sitting at the end of a sushi conveyor belt and literally just picking every plate off the line as it passed. But what does it mean if you crave sushi while pregnant? I never knew just how badly I loved sea urchin until I was told I could no longer eat sea urchin.

Most of my cravings while I was growing humans revolved around whatever was popular at the time. Mostly, it was Shake Shack. Their food is just so good, and their fries are like pillows of deep fried heaven that have been blessed by the god of potatoes on their way to my mouth. But sushi still ranked pretty high. I used to watch my husband eat it, and I swear, I craved it like I craved cigarettes after I quit smoking. My mouth would water, my heart rate increased, and I think the smell of it might have given me an orgasm, I'm not sure. But was it real? Did I need something essential in the fatty, raw flesh of the fish, or was it all in my hungry, pregnant mind?

As it turns out, it's mostly all in your mind. Pregnancy cravings (with the exception of cravings for things like ice or chalk, which is due to anemia), especially in North America, have more to do with your expectation of cravings, than with a physical need, according to Frontiers in Psychology. Essentially, you're told you're supposed to experience cravings, so you do. Think about it, even Bella Swan had an interesting interpretation of pregnancy cravings when she decided to have a blood slurpy out of a styrofoam cup in Breaking Dawn.

But even non-vampire expecting moms talk about food cravings all the time. I'm talking about it right now. It becomes so ingrained in what you expect, that your mind completes the act by triggering a craving. The craving is real, no doubt. You sincerely want that sushi. So, what does it mean if you crave sushi while pregnant? It means that you're pregnant. Normal, even. But until you can safely eat that spicy salmon roll, you'll just have to get used to the California roll. According to the Mayo Clinic, the risk of contracting bacteria or harmful viruses through raw, uncooked fish is too great, so you'll have to pass on the nigiri. Maybe if you add more wasabi to that California roll, you won't feel the lack as strongly. (Doubtful, though.)