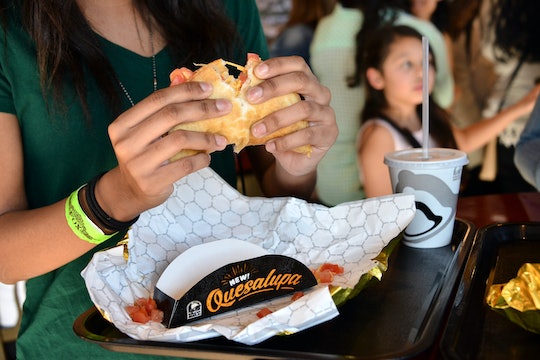 Here's Why You're Craving Taco Bell During Pregnancy

There's a lot that can catch you off guard about pregnancy, and weird cravings can be a large part of that. So many women crave things they wouldn't typically want to eat, and many even become averse to foods they love. You might be surprised if you crave meat when you're vegetarian, or fresh, crispy broccoli when you usually don't enjoy many veggies. Could these cravings be a sign of something else? What does it mean if you crave Taco Bell while pregnant? Take heart, your body could be telling you something. (Like Taco Bell is delicious.)

If you have minor cravings during your menstrual cycle, then you're no stranger to hormone-related cravings. According to the March of Dimes, pregnancy cravings are typically the same thing, intensified. Since pregnancy hormones can make your sense of smell stronger, they can also affect your sense of taste and make you want certain foods. Hormones can also affect your sensitivity to certain tastes, which may make you crave more intense flavors at times, like smelling beef and deciding you need three soft tacos right this minute.

According to Psychology Today, pregnant women who develop gestational diabetes tend to crave sugary foods at an increasingly high rate, especially in their second trimester. This craving, and gestational diabetes, usually resolves itself after delivery. Other than that, science still doesn't know very much about what causes cravings.

Cravings could potentially signify a lack of a certain nutrient in your diet, as mentioned by Parents. For instance, if you crave dairy foods like cheese or ice cream, your body may be looking for a calcium boost. If all kinds of fruit have your mouth watering, vitamin C might be missing from your meals. And if you're really longing for that beef burrito from Taco Bell, an iron deficiency may be to blame. It's worth noting, however, that no research has proven this to be true — it's really just a theory.

Honestly, for the most part, cravings can be just cravings, and if you practice moderation, there's no reason to stop yourself from indulging. Your midnight need for a Chalupa may just be because of all the late night Taco Bell commercials, but that doesn't mean you shouldn't give your baby what they seem to want. Just be sure to check with your doctor if you feel like you're craving a lot of one type of food to rule out a vitamin deficiency, or if you're craving something non-edible (like dirt or crayons). Weird cravings are usually just weird cravings, but sometimes they can pose a risk of a greater condition, and your doctor is the one who can speak to your own individual situation.