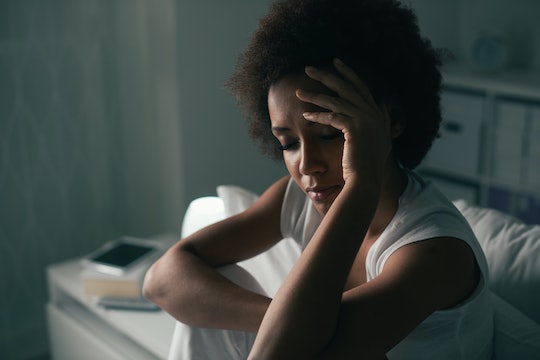 What Does It Mean To Be Anorgasmic?

Orgasms. Despite the semi-taboo nature of "the big O," every sexually active person craves a climax at the end of sex. For some, however, orgasms can be difficult to achieve. Many women struggle with the inability to climax during sex, but the problem affects more people than you probably even realize. The medical community calls it "anorgasmia," but what does it mean to be anorgasmic and is there a "cure" for the condition?

According to the Mayo Clinic, anorgasmia is when you have regular difficulty reaching orgasm despite adequate stimulation. The article noted that most women cannot reach orgasm with vaginal penetration alone, but for some, reaching it at all seems impossible, no matter what they do. And, for what it's worth, it's not as uncommon as people may think. Shape magazine noted that a surprising 10 to 15 percent of women suffer from anorgasmia. Since orgasm involves both physiological bodily reactions and emotional and cognitive changes, female orgasm is often much more difficult to achieve than male orgasm (although men do struggle with anorgasmia too.)

To make things even more complex, there are different types of anorgasmia. The aforementioned Mayo Clinic article noted that lifelong anorgasmia (never experiencing orgasm), acquired anorgasmia (having difficulty climaxing after previously having orgasms in the past), situational anorgasmia (only being able to climax under certain situations), and generalized anorgasmia (inability to climax with any partner or any situation) are all common forms of anorgasmia that affect women.

There are a variety of things that can cause anorgasmia as well. According to the Arizona OB-GYN Affiliates, physical things like having a smaller clitoris, taking certain medications, gynecological issues, aging, or even alcohol use and smoking can hinder your ability to orgasm. Similarly, psychological issues can play a part as well. Anxiety, depression, fear of opening up, preconceived ideas about sex, and a host of other emotional barriers can cause anorgasmia.

Despite all of these challenges, it's possible to overcome anorgasmia. Granted, there is no FDA approved medication for treating orgasm disorders in women, according to MedSpace. But things like sex therapy, couples therapy, or experimentation in bed can help. In order to go through those things, however, you having to be with a partner who you feel comfortable opening up to and who is committed to helping you enjoy sex.

The common mindset of convincing women to "just try harder" to climax is both damaging and misleading. Guilt or feeling like their inability to have an orgasm is somehow their fault is a cultural conversation that needs to shift. But until it does, knowing that anorgasmia is a common occurrence and that there are ways to help, can encourage women who are feeling a bit well, anti-climactic.