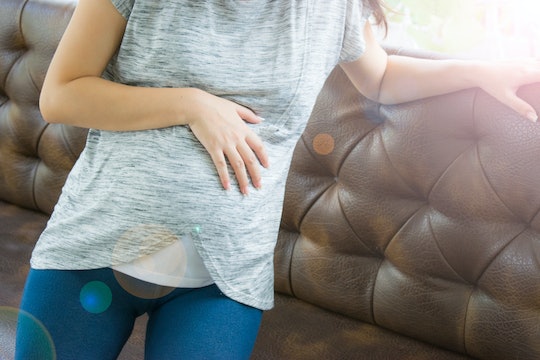 What Does It Mean To Labor Down? Experts Explain

For anyone who has watched a handful of happy "she's having a baby" type movies, you're probably familiar with the cinema-version chronology of (non-complicated) labor. Woman's water breaks, she yells all the way to the hospital, and the next thing you know nurses are yelling at her to push. But of course, there's many different ways that labor can go down, many different ways to push, and even different methods of breathing while pushing. Sol, what does it mean to labor down? I mean, it sounds like a yoga pose, right? Well, it isn't. Here's what labor and delivery experts want you pregnant moms to know.

In it's most simple terms, laboring down (also known as bearing down), means delaying pushing until you feel the urge to push, and usually occurs in the second stage of labor (i.e. active labor), according to BabyCenter. This more spontaneous method of pushing is an alternative to the kind of pushing we often see in movies, in which a nurse or birth attendant instructs the mother to take a deep breath and push (pushing after taking a deep breath and holding it is known as the Valsalva method), or to push during each contraction, according to the American Congress of Obstetricians and Gynecologists (ACOG).

Some experts say that laboring down (or pushing only when you feel the need), can limit possible vaginal tearing. According to the Mayo Clinic, when you give pushing a rest, you're also allowing your vaginal tissues a chance to "stretch rather than tear."

According to a 2014 paper published on the U.S. National Library of Medicine/National Institutes of Health's (USNLM/NIH) website, scientific evidence supports the laboring down method over directed pushing, or pushing during each contraction. The site goes on to report the following:

"Delaying maternal bearing-down efforts . . . results in optimal use of maternal energy, has no detrimental maternal effects, and results in improved fetal oxygenation."

More recently, however, the health community has taken a slightly different stance regarding whether one should favor one method of pushing over the other. The reason? Well, patient happiness and satisfaction has a lot to do with it.

In 2017, the ACOG issued a new opinion on their approaches to interventions during birth and labor, recommending the medical and health care community use minimally invasive techniques and aim for patient satisfaction with regard to low-risk pregnant women. According to ACOG's statement, this revised opinion comes out of the finding that many of the current obstetric practices do not really benefit low-risk pregnant women. When the data of immediate pushing (in the second stage of labor) versus delayed pushing (laboring down being included in this method) were compared collectively, there were almost no clinically significant neonatal outcomes or maternal physiological outcomes observed. Given the lack of evidence supporting the benefits of any particular method of labor, ACOG recommends that in the case of low-risk patients, the mother can decide which method of pushing is most comfortable for her.

The doula and midwife community is all about making the mom-to-be comfortable and going with the labor and birth plan that she has directed and planned herself. In an article on the Doula's of Northern America's (DONA) website, it cites the aforementioned ACOG statement and applauds the fact that ACOG is leading the medical community towards less invasive labor practices.

But the doulas aren't exactly dancing in the streets at the news. Change takes time to fully take hold. As stated on DONA's website: "While there are some encouraging suggestions in this Opinion, doulas are unlikely to see significant change to care practices or hospital policies as a result." DONA encourages patients to continue to voice their concerns, desires, and to ask questions when it comes to all aspects of labor, including their pushing preferences. This is great advice for any mom-to-be, whether she goes the doula route, or the hospital route, or decides to push as instructed or labor down when she feels the urge. This is your labor. Do you.