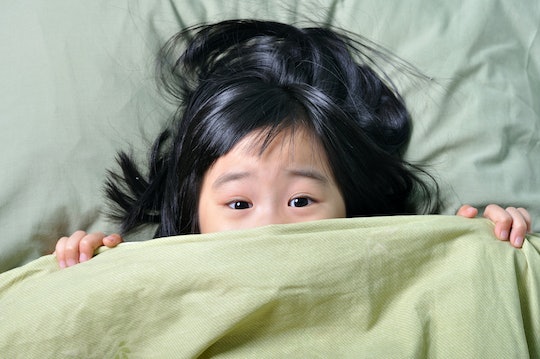 What Does It Mean When Toddlers Have Recurring Nightmares?

If you had nightmares growing up, you know how scary, disorienting, and disruptive that they can be. And whether they're one-off situations or you're dealing with something that recurs again and again over the course of weeks, months, or years, nightmares, particularly as a kid, can have a real effect on you. Nightmares might be especially troubling for toddlers and little kids, and when you're the parent of a child dealing with nightmares, they're troubling for you too. So what does it mean when toddlers have recurring nightmares? Are they preventable? Or do you just have to do your best to manage them and wait them out until your kid gets older and doesn't seem to have them as frequently anymore?

As difficult as it is on you when your little one is struggling with recurring nightmares, it is, of course, much harder on them. In order to help them manage the problem and sleep better each night, it might help to understand more about these kinds of nightmares that might occur, particularly when they're still young. Kids Health noted that many kids, even young preschoolers, can understand that nightmares aren't real, they're just dreams, but that knowing that fact doesn't make them any less frightening in the moment when they occur. And not all kids are able to tell the difference. Plus, as many adults know, sometimes it can be difficult to determine what's a dream and what's not, and if your child has a particularly realistic dream or isn't yet able to distinguish between the two, that can make it even scarier.

Though you might want to know what's causing your child to have nightmares, whether recurring or not, it's unfortunately often unclear exactly why kids have nightmares, Cleveland Clinic noted. That being said, it's possible that your kid's nightmares are a result of something that upset them when they were awake. In an interview with US News & World Report, Dr. Marc Weissbluth, MD, a pediatrician and expert in children's sleep said that when your child experiences a nightmare, any nightmare, it's best to get up, comfort them, and give them as much reassurance as they need.

If your child's nightmares are recurrent, however, you might need to do more. In a piece that he wrote for VeryWell Health, Dr. Brandon Peters MD, a board-certified physician, said that recurrent nightmares and nightmares that are particularly disruptive or associated with symptoms like bedwetting, snoring, sweaty sleep, and more might need to be addressed. If your child is experiencing these sorts of nightmares, talking to their pediatrician to share your concerns and so that their doctor can rule out medical issues like sleep apnea can help.

Additionally, if your child has regular nightmares that last longer than you might think is typical — kids usually have fewer nightmares as they grow up — then they might also be more prone to psychotic symptoms later on in life, as researchers at University of Warwick found. Encouraging healthy sleep habits and an overall healthy lifestyle is very important, as Dr. Helen Fisher, PhD, one of the researchers involved in the study, explained in a release published on Science Daily's website. And in a piece that he wrote for Psychology Today, sleep expert Dr. Patrick McNamara, PhD, wrote that more research that examines nightmares, dreams, and health in kids needs to be done to better understand how these things might really affect them long-term.

If your child is struggling with nightmares, sleep terrors, or particularly vivid dreams in general, you might want to reach out for help dealing with them. Though they likely will have fewer as they grow older, the situation can be distressing, so you may not want to wait it out if you have reason to believe that there could be something else going on that needs to be addressed. In the meantime, hug your little one, wipe their tears, and make sure they know you're there for them when they wake up from a nightmare. Nightmares can be extremely scary for kids, but there are things that you might be able to do as a parent that can help.

More Like This
Here's How To Handle Potty Training During Nap Time
Can Elderberry Help Prevent Illness In Kids? Doctors Weigh In
What Is RSV?
The Best Halloween Family Pajamas To Match Your Boos