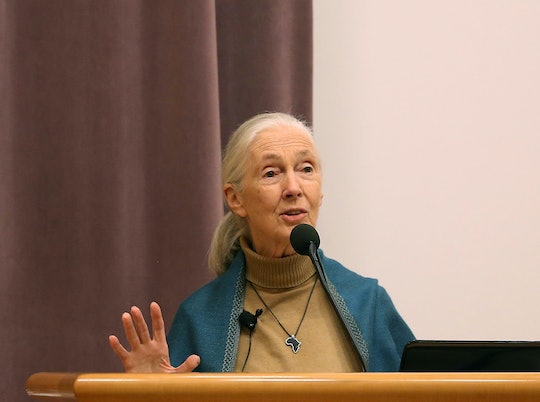 What Does Jane Goodall Want To Say To Pope Francis? She Was Featured In Google's Women's Day Doodle

In honor of International Women's Day on Tuesday, Google has temporarily replaced its logo. These so-called "Google Doodles" are a longstanding tradition, a way to celebrate holidays or draw attention to important events. Although they're called "doodles," sometimes Google goes beyond a drawing, including videoes or interative games. The newest one is a short video featuring women and girls from around the world talking about their goals. One such woman is the legendary anthropologist Jane Goodall, who hopes to speak to Pope Francis about the environment.

The dialog of the video is spoken in the stars' native languages, for the most part. But, through superimposed sketches, viewers are able to infer what the women are saying as they're each asked to complete the sentence, "One day, I will..." The women mime donning an astronaut's helmet, swinging a baseball bat, and visiting Times Square. "I will discuss the environment with Pope Francis," Goodall announces confidently, which has led some viewers to wonder what, exactly, a chimpanzee expert wants to talk about with the leader of the Catholic church. But the unlikely pair are both no strangers to speaking about the environment, and mankind's effect on it, and their teaming up could be beneficial to us all.

Francis cemented his status as a new kind of pope when he spoke out on climate change last June, saying that it was "one of the principal challenges facing humanity in our day." The pope stressed that the effects on the environment spilled over into economic and social repercussions, and encouraged his followers to do their part by using public transit, planting trees, and lowering their electricity consumption (he also snuck in some messed up comments on gender and abortion, but let's pick our battles for now).

The pope also addressed the United Nations in September, urging them to stand up for the environment and telling them that "Any harm done to the environment, therefore is harm done to humanity. The ecological crisis, and the large-scale destruction of biodiversity, can threaten the very existence of the human species."

Goodall, a longtime champion of the environment, has noticed the pope's interest in conservation and has spoken on it from time to time. In September, following the Vatican's announcement of World Day of Prayer for the Care of Creation ("Creation" is what the pope calls the Earth), Goodall offered her own "prayer" of sorts, in which she beseeches humanity to "keep our minds open to new ideas and shun dogma" and "heal the hurts that we have inflicted on nature." In her book, Reason for Hope: A Spiritual Journey, Goodall lamented that, while she's met many atheists who understand that it's up to mankind alone to take care of the planet, "I have encountered a number of people with a strong faith in God who shrug off their own human responsibilities, believing that everything is safely 'in God’s hands.'"

In October, Goodall spoke at an interfaith conference about the importance of bringing people from all religions together to save the environment we all share, telling Religion News Service that Pope Francis gives her hope, and that she finds him brave for "tackling some very ancient customs which are not good ones" and that she hopes his speaking out will cause "hundreds and thousands of young Catholics who might not have been concerned with the environment [to] become concerned." The Earth needs all the help it can get, and the pope has about a billion people looking to him for guidance. Getting him in her corner would mean a lot for Goodall, and the way the popes's been talking, things are looking good.