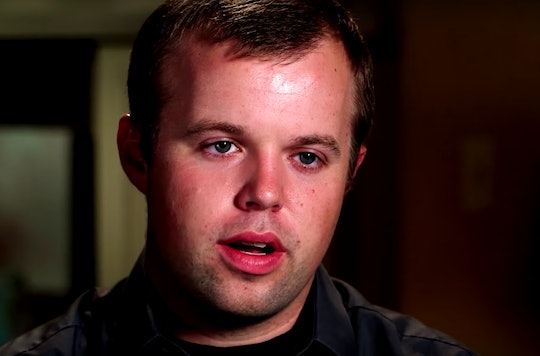 So, Just What Does John-David Duggar Do?

With one 28-year-old Duggar son recently making headlines for a rumored secret courtship, fans of Counting On are taking a renewed interest in John-David Duggar. With 19 kids in the family, it's easy to lose track of what each of them is doing, so fans definitely have questions. We all know John-David is one of the older Duggar children, but what does John-David Duggar do? Has he talked about courting anyone in the past? What's he looking to do in life?

As it turns out, John-David leads a pretty busy life. He owns his own business, Duggar Towing, where he tows and fixes cars in Springdale, Arkansas. "John-David has always loved to drive anything, from back-hoes and tow trucks to our forty-five-foot-long bus," Jim-Bob and Michelle Duggar, John-David's parents, wrote in A Love That Multiplies: An Up-Close Look At How They Make It Work. "He's mechanical and can fix about anything that breaks."

That love of driving hasn't been limited to roads, either. Jim-Bob and Michelle shared in their book that when a few of the Duggar children decided to go skydiving, John-David was happy to avoid the jump — but wished that he had a pilot's license so he could fly the plane.

Soon enough, John-David got his pilot's license, as well — and by late 2012, he was already giving other Duggar children lifts in small planes, judging by pictures on the Duggar family blog. Piloting doesn't seem to be something John-David does professionally (no 747s manned for now), but it's further proof that he's pretty into machinery and piloting vehicles.

On top of that, John-David does some construction work and, according to TLC, works as a first responder, firefighter, and police volunteer. The Duggars have also written on their blog that John-David owns his own home and has put away some savings by leasing it out. All of which, according to Michelle, makes John-David a pretty good candidate to start courting (or, you know, dating — but in Duggar-speak).

"He's definitely at that place in life where he's ready to be a husband and a provider and he would be open to courting a young lady if he felt she would be the one for him," Michelle wrote in 2013. And when courting rumors came up the next year, according to the International Business Times, Jim-Bob clarified on 19 Kids and Counting:

He’s not courting anybody right now, but it probably won’t be too long. John-David is a great guy. He’ll be a great catch for some young lady.

It sounds like John-David has done a pretty solid job of developing a life he enjoys, with plenty of work and hobbies to enjoy. But he's also hoping to eventually start seeing someone and raise a family. In April 2016, he said in a TLC video:

Future plans would be to, I think, one day, you know, the lord will bring the right one along, and I'll start a family and hopefully be able to invest in their lives and raise up a generation that will be great people for this society. ... I don't know ... I am praying about it ... one day. Just keep watching.

In the meantime, however, John-David simply seems to be enjoying his time with his (rather large) family — which has probably been filled with its fair share of weddings and births lately — and his many interests. Until John-David lets the world know about a possible courtship, any rumors are just hearsay, and we'll just have to keep enjoying the other happenings on Counting On instead.