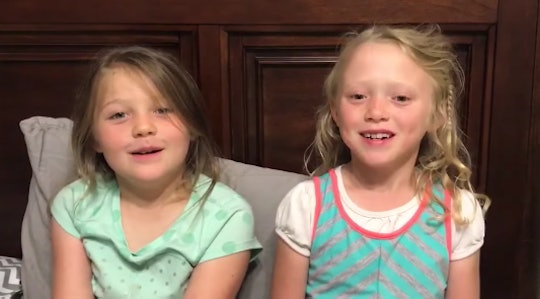 The Duggar family of reality TV show fame infamously includes 19 children, born to Jim Bob and Michelle Duggar of Arkansas. For the most part, people love them or hate them. Personally, I have a soft spot for the youngest, Josie Duggar, partly because we have the same name, which is clearly the best J name to have. I've got high hopes for that little girl. A lot of fans are curious about how the youngest of the main Duggar family is doing these days, and thanks to videos the family uploads to YouTube, and to the continued existence of the spin-off show Counting On, we have some idea what Josie looks like now. For the most part, she seems healthy and happy for a little girl who faced a lot of challenges at birth.

Josie was born on Dec. 10, 2009, so she's now 8 years old, according to People. She was born almost three months premature, after her mom was diagnosed with preeclampsia. She weighed just 1 pound, 6 ounces at birth. And just over a week later, her bowel perforated, but luckily, she didn't need surgery for the complication so early in life. For someone who faced an uphill battle right from the start, Josie seems fairly healthy these days, if the videos and photos her family provide to fans are any indication.

(Please be warned, the following video and the remainder of the article may feature images or descriptions of a medically fragile child.)

After she was born, Josie didn't go home with her family for good for several months. Upon her release, her physician, Dr. Robert Arrington, co-director of the neonatal intensive care unit at Arkansas Children’s Hospital, told People:

We are happy that she is doing so well and fully expect her to continue to thrive. Today, as she’s leaving, she looks like a full-term baby.

And these days, Josie seems to still be doing well and appears to act like any other girl her age. However, when it comes to her health, there have been a few hiccups for the little girl along the way.

Josie reportedly suffered a seizure while filming TLC's 19 Kids and Counting when she was just 5 years old, according to Us Weekly. But Michelle explained on the show that it was unfortunately not the first one she'd dealt with in her young life. She said in the video, featured in a People article in 2015:

One of the little glitches for Josie is that if she runs a fever, she does have the tendency to have febrile seizures. It might happen just like that; she’ll spike a temp when you least expect it, and she’ll have a seizure.

But her older sister, Jana, and the director of the episode, Scott Enlow, jumped in and helped her until paramedics could arrive, and Josie didn't appear to have lasting effects from the medical scare.

These days, Josie seems like a pretty normal 8-year-old girl. She appears in a lot of videos her family puts on their YouTube channel, and shows up every now and then on Counting On, even though the show mostly focuses on her older sisters who have gone off to start their own families.

In fact, her sister, Jessa Duggar Seewald, recently posted photos from the Duggar family's Christmas celebration to her Instagram account, and Josie was featured in one of the shots she shared. In the third picture in the gallery below, you can see Josie enjoying Christmas presents with two of her sisters.

Plus, Josie was in her sister Jinger Duggar Vuolo's wedding, and Jinger recently shared a photo of her sisters from the event to her Instagram. Josie basically just looks like a pint-sized version of the rest of them.

And the official Duggar family Instagram shares photos that include Josie all the time. One from just a few weeks ago showed Michelle, Josie, and another Duggar daughter, Jordyn, making chicken and dumplings together.

No matter how you might feel about the Duggars, I think we can all agree that it's a great thing that a baby who spent so much of her first months of life in the NICU seems to be a happy, healthy young girl now. It will be interesting to see what Josie gets up to later in life. I'm secretly hoping for a tell-all book from my little name twin, but we'll have to wait and see.