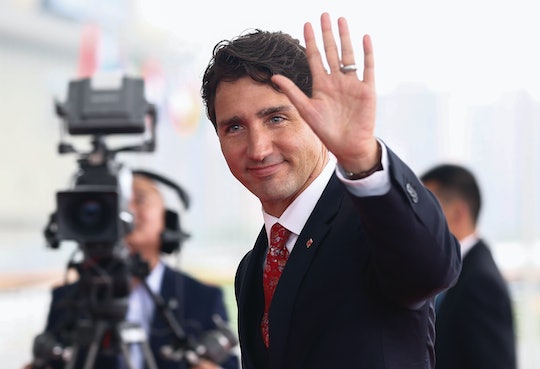 Trudeau & Trump's Visit May Get Awkward

Meeting in person for the first time on Monday, Canadian Prime Minister Justin Trudeau will join U.S. President Donald Trump in Washington, D.C., predictably as an official gesture of friendly diplomacy. The two definitely have plenty to talk about, given their vastly different political platforms, but what does Justin Trudeau think of Donald Trump, really? Called "the anti-Trump," Trudeau appears to have a divergent perspective on just about everything — and due to these fundamentally opposite attitudes, Trudeau's visit might get awkward.

Trudeau's opposition to Trump hasn't been vocalized, exactly. “It is not the job of a Canadian prime minister to opine on the American electoral process," he previously asserted at a news conference in Calgary, Alberta. Still, The New York Times reports that Trump's "personal style and policies are widely disliked by, ... according to Mr. Trudeau’s inner circle, Mr. Trudeau himself."

By and large, Trudeau is attempting to keep it professional. In announcing the upcoming trip to Washington, Trudeau tweeted: "Strong Canada-US ties help the middle class in both our countries. Monday, I'll meet @realDonaldTrump in DC to keep working for that goal."

The policies that the two leaders champion couldn't be more different. For example: Trudeau prioritizes his country's fight against climate change, whereas Trump doesn't believe in climate change at all. Trudeau welcomes Syrian refugees into his country; Trump has blocked foreign travelers from a list of Muslim-majority nations using an executive order. Trudeau's a proud feminist; Trump's record of sexist behavior is pretty upsetting. The list goes on.

Trump's call with Australian Prime Minister Malcolm Turnbull, for instance, ended with Trump informing Turnbull: "This was the worst call by far." A call with Mexican President Enrique Pena Nieto consisted of Trump reportedly warning Nieto that he was willing to send U.S. troops to stop the so-called "bad hombres down there," according to The Associated Press. In Trump's foreign conversations, smoothing things over is traded in favor of assertion of power.

Trade is reported to be the main topic on Monday's agenda, with Trudeau investigating if Trump "plans protectionist measures that could cripple Canada's economy," according to Reuters. Indeed, this is a high-stakes negotiation for Trudeau, as he'd prefer to keep his country in the United States' good graces, but doing so may happen at the expense of suspending his personal, progressive liberal beliefs.