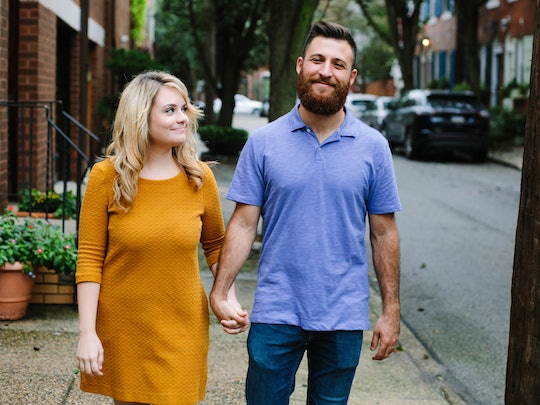 Kate Has Her Family's Support On 'Married At First Sight'

When Kate joined Season 8 of Married at First Sight, her entire family was behind her. She's close to her parents and two brothers, according to her Lifetime bio, so it must be hard for them to see her go through such a tough time with Luke. Any new marriage is going to take some adjusting, but Kate and Luke have dealt with more difficulties than most. So what does Kate's family think of Luke?

It doesn't look like Kate's family has commented directly on Luke. They haven't done any interviews to address their daughter's marriage, and their social media accounts (if they exist) are impossible to locate. That's not a huge surprise, since Kate is relatively private on social media, too; her Instagram account isn't even public. But based on what Kate has said about her family, it would stand to reason that they're on her side no matter what. As she told Hollywood Life during an exclusive interview, her parents and brothers always have her back.

Kate said that her favorite memory from her wedding to Luke was "feeling the love of all the closest people in my life." They fully supported her decision to marry a stranger even though it wasn't the traditional route most people take to find a life partner. "I could feel how much they wanted me to find happiness all day," she said. The wedding was very last minute, but everyone Kate loved was there to celebrate her. One of her brothers even walked her down the aisle.

It seems like Kate's family is very involved in her life, though they've dealt with their own rocky situations in recent months. Her Lifetime bio reveals that the entire family is still reeling from their parents' divorce last year. It left Kate feeling pessimistic about love and relationships, which probably isn't helped by the fact that her romance with Luke isn't going as smoothly as she may have hoped. He was nervous at their wedding, which was to be expected, but the discomfort didn't dissipate after they spent more time together. Their first kiss supposedly left Luke repulsed.

If Kate's family is as invested in her happiness as she said they are, then it would stand to reason that they're not thrilled to see her feeling so uncertain about her new relationship. Of course, it's impossible to know for sure without a direct comment from Kate's parents or brothers, so any speculation about how they might feel needs to be taken with an entire salt shaker. But if I found out my sister's new husband said that kissing her made him feel "dead inside," I would not be the guy's biggest fan.

Kate's family may not be speaking publicly about Luke because they value their privacy, or simply because she asked them not to say anything. Fans still don't know if her marriage to Luke will work out or not. Though the situation doesn't seem especially hopeful now, anything could change in the next few weeks. It's possible that Kate's family could be saving their comments until MAFS concludes. And if that is the case, then I can't wait to see what they have to say.