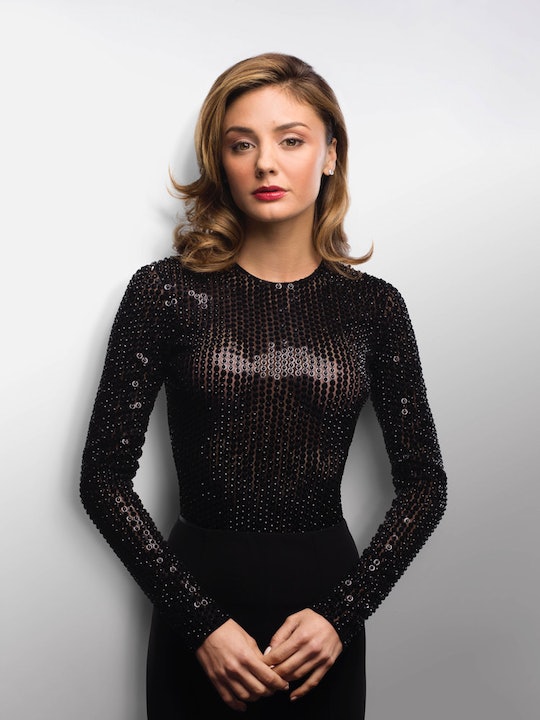 'The Arrangement' May Tackle A Real-Life Duo

Could E!'s new scripted series, The Arrangement, really be based on Tom Cruise and Katie Holmes? A lot of people seem to think so. The new series follows the lives of TV actress Megan Morrison (Christine Evangelista) and movie star Kyle West (Josh Henderson). The pair meet when Megan auditions for Kyle's latest film and instantly end up romantically involved, so much so that Kyle proposes they have a contract marriage. Kyle is also involved in The Institute of the Higher Mind, which many are comparing to the Church of Scientology, which Cruise is a part of. So what does Katie Holmes think about The Arrangement? (Romper has reached out to Holmes' team for comment and has yet to hear back.)

Thus far, neither Holmes nor Cruise has commented on the new show and it's unlikely they will. However, The Arrangement executive producer Jonathan Abrahams thoroughly denies that the show has any basis on the former couple. "We really had no interest in capturing the headlines and doing a ripped-from-the-headlines type of show or storytelling in that way," Abrahams told ET Online. "It was really about how can we put people into the situation that's very unusual and sometimes hard to believe, and make it believable."

The cast pretty much seconded Abrahams' statement. "We're a very unique story on our own," Henderson told ET, while Evangelista added that "This isn't a documentary at all." Despite the denials, it's hard not to make comparisons between the show and Cruise and Holmes. For one, Kyle is close friends with Terence Anderson (Michael Vartan), the head of The Institute of the Higher Mind. Similarly, Cruise's best friend and the best man at his wedding was the head of the Church of Scientology, David Miscaviage, according to BBC News. Also, both Megan and Holmes started out as TV actresses (Holmes starred on Dawson's Creek) prior to meeting their beaus, who were big movie stars.

Still, Abrahams stands firm on his claim that his story isn't a copy of the "TomKat" romance, but is instead a totally different story between two people who are facing all the odds stacked against them. "It's really a show about these characters and their relationships, and it's a love story," Abrahams told ET in the same interview.

You can watch The Arrangement when it premieres on Sunday, March 5 at 10 p.m. ET on E! and decide for yourself if it really is based on Cruise and Holmes.