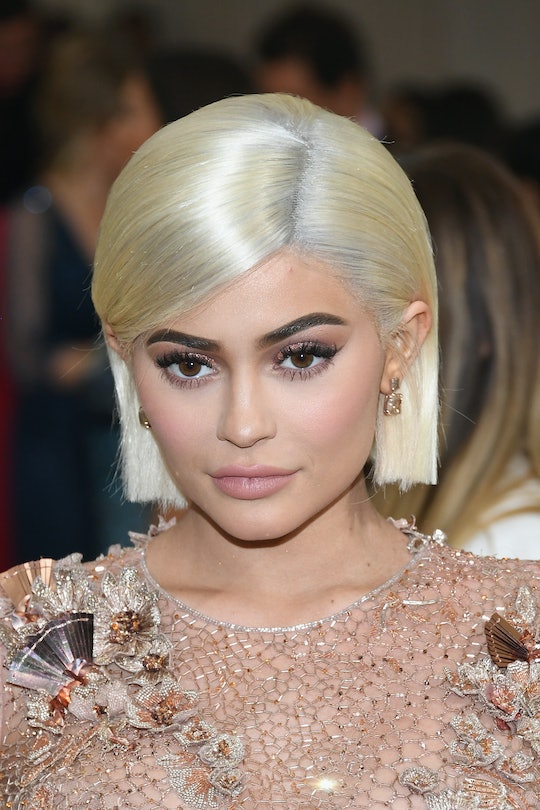 She's finally done it. Kylie Jenner finally announced her long-rumored pregnancy with news of the delivery of her baby girl. If you're a fan of the socialite, you've likely been waiting with bated breath for this exact moment. But what does Kylie's baby Instagram announcement mean exactly? Speculation about the reality television star's alleged pregnancy swirled for months, and now that it's been confirmed in the most dramatic way possible, the baby announcement deserves nothing less than super detailed scrutiny for fans to ponder over.

First off, let's recap the beginning of the whole Kylie pregnancy story, shall we?

In late September, TMZ was the first outlet to report that Kylie was pregnant with her boyfriend, Travis Scott. Supposedly, Scott told friends that the two were expecting a baby girl. And the internet went nuts.

But her mother, Kris Jenner, wasn't willing to confirm the news in September, and even told The Cut that it was "kind of wild that everyone is just assuming that that’s just happening." And thus began a months-long game of the media and fans trying to get someone, anyone, from the Kardashian family to confirm that Kylie was, in fact, pregnant.

Up until Feb. 4, neither Kylie nor her boyfriend officially confirmed the news. Fans looked for clues in every Snapchat, every Instagram post, every public appearance, and of course the famous Kardashian Christmas card, but to no avail. Until now.

In Kylie's Instagram post on Sunday, she finally confirmed the news that all Keeping Up With the Kardashians fans have been waiting for: she was indeed pregnant, and had delivered a healthy baby.

But what does Kylie's Instagram post actually mean? Does it hint at her birth experience, or whether it's a boy or a girl? The post definitely gave away a couple of pieces of information, but honestly, it could have been a screenshot of just the baby's foot, and fans still would have found a way to read into it.

However the post wasn't a photo, but rather a lengthy, but very sweet message to fans, which provided an explanation as to why she decided to keep this news so private. The full statement can be found below:

I’m sorry for keeping you in the dark through all the assumptions. I understand you’re used to me bringing you along on all my journeys. my pregnancy was one I chose not to do in front of the world. I knew for myself i needed to prepare for this role of a lifetime in the most positive, stress free, and healthy way i knew how. there was no gotcha moment, no big paid reveal i had planned. I knew my baby would feel every stress and every emotion so I chose to do it this way for my little life and our happiness.

pregnancy has been the most beautiful, empowering, and life changing experience I’ve had in m entire life and I’m actually going to miss it. I appreciate my friends and especially my family for helping me make this special moment as private as we could,” she continued. “my beautiful and healthy baby girl arrived February 1st and i just couldn’t wait to share this blessing. I’ve never felt love and happiness like this i could burst! Thank you for understanding.

As you can see, it's pretty self explanatory and I totally get her reasoning behind keeping her pregnancy so private. It's her life, after all, and her explanation is completely justified. (Though she really didn't need to offer an explanation at all, really.)

Kylie's announcement came after her sister, Khloé Kardashian, finally confirmed her pregnancy in a post on Instagram. In the caption for the "bump" photo she uploaded, Khloé wrote:

My greatest dream realized! We are having a baby! I had been waiting and wondering but God had a plan all along. He knew what He was doing. I simply had to trust in Him and be patient.

Khloé had also been shy about confirming the pregnancy before she finally made the announcement on the social media platform, and the rest of her family kept the news quiet too.

For instance, when Khloé's sister, Kim Kardashian West, appeared on The Ellen DeGeneres Show in November, she wouldn't confirm that either Khloé or Kylie was pregnant, though she did let it slip that her own third baby, which she was expecting via a surrogate, was a girl. At the time, Kim explained to Ellen, according to Us Weekly:

Alright, I’m going to break it down. This is how we work in the family...When there are lots of rumors, we have these family group chats and we threaten each other’s lives if we speak for the other one. So, for the safety of my life … we just decided there is so much that goes on that we respect each other’s right to speak for themselves. So I will speak about myself, and hopefully they can come on [the show] and address whatever rumors you might have.

But neither Khloé or Kylie chose to confirm the rumors on Ellen's show, and instead turned to social media to do it.

After Khloé confirmed that she was pregnant, fans figured it was just a matter of time before Kylie made her own announcement. Now, she's finally done it, and she did it on her own terms. No matter how you might feel about Kylie or the rest of the KarJenner family, every mom-to-be deserves at least that.